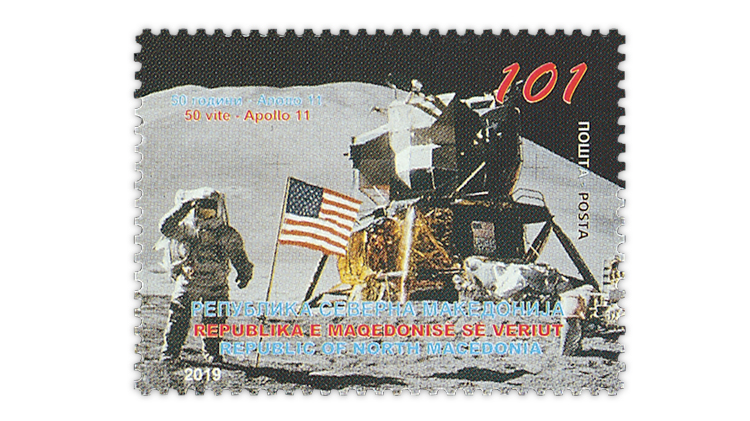 Macedonia’s new name, Republic of North Macedonia, is inscribed in three languages on the commemorative stamp celebrating the 50th anniversary of the first manned moon landing. 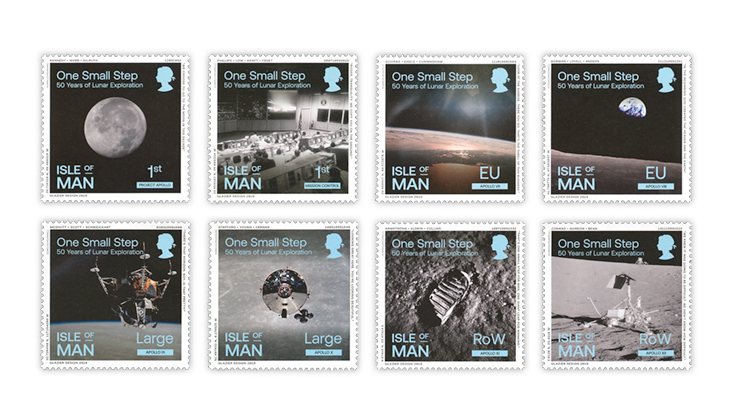 The Isle of Man’s One Small Step 50 Years of Lunar Exploration set of eight stamps honors the 1969 first manned moon landing, as well as missions leading up to and following Apollo 11. Facts, figures and quotes are included in the inscriptions on each sta 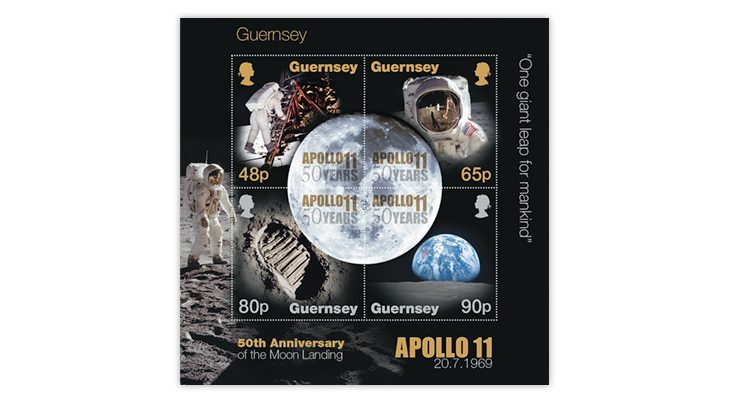 Guernsey depicts key moments from the Apollo 11 maned moon landing on four stamps issued on July 20, the 50th anniversary date. The four stamp designs are se-tenant in a souvenir sheet. 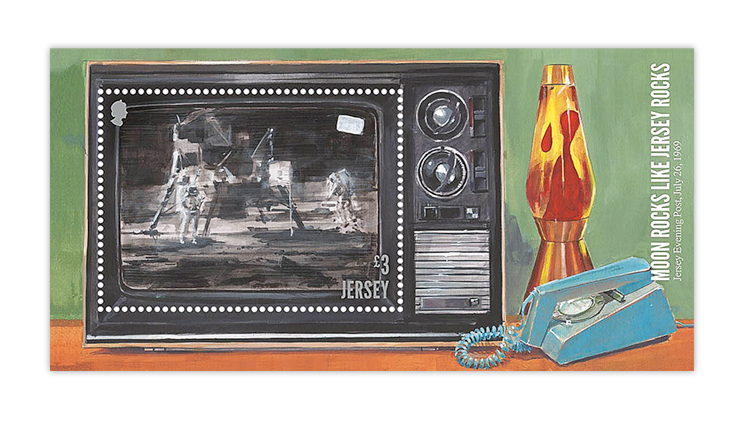 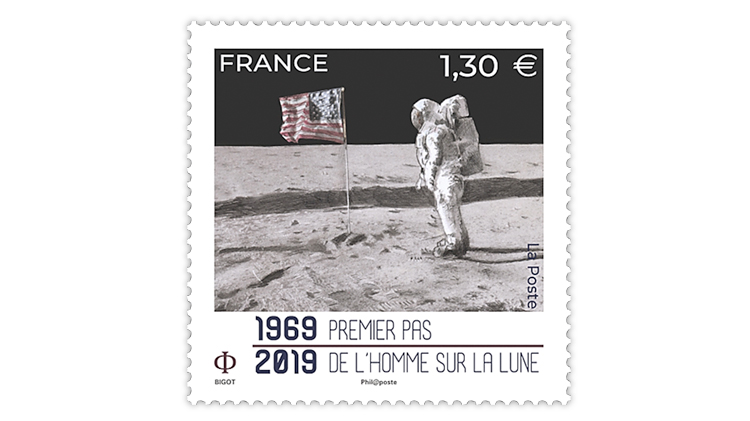 A stamp to be issued July 19 by France features an astronaut and the flag of the United States on the moon. 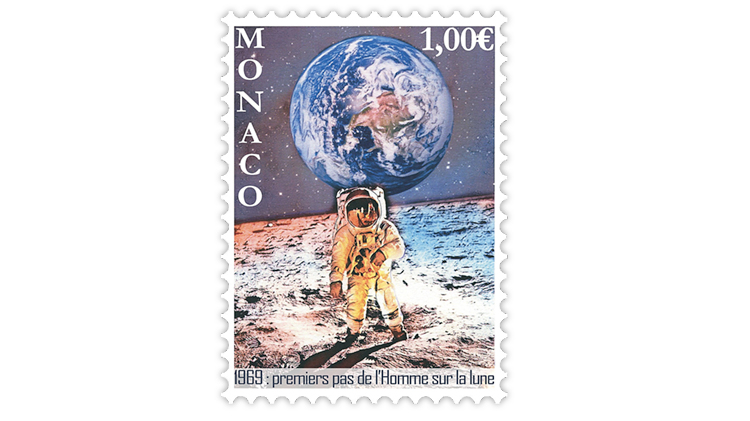 Monaco issued a €1 stamp July 5 to commemorate the 50th anniversary of the first man on the moon. 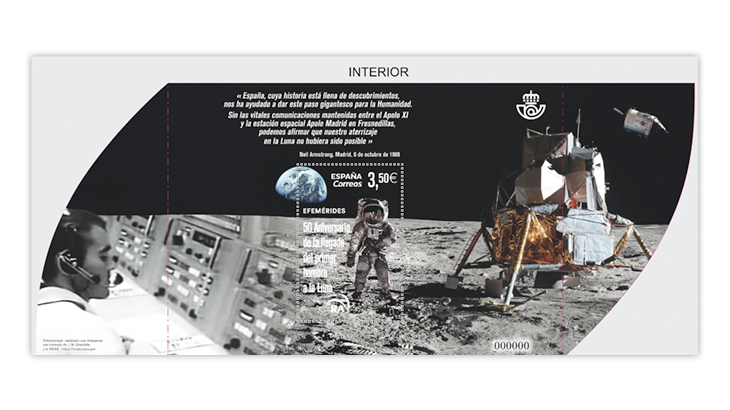 Spain’s souvenir sheet for the 50th anniversary highlights its connection with the Apollo 11 mission. The sheet also was designed so it can be folded. 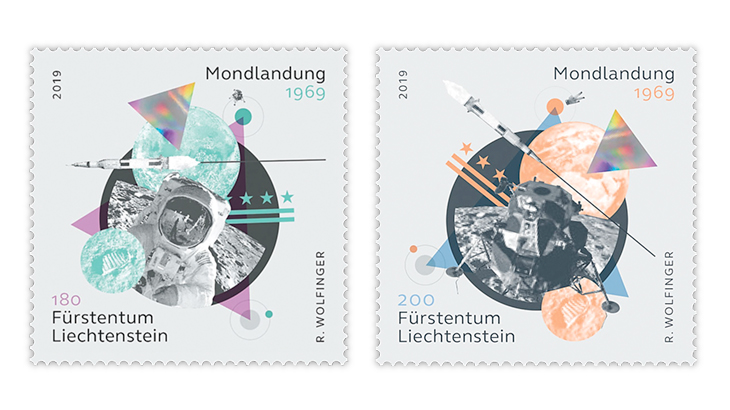 The collage designs from Liechtenstein represent an astronaut (1.80 francs) and the Eagle lunar lander (2fr). The stamps were issued June 3 in two panes of eight. 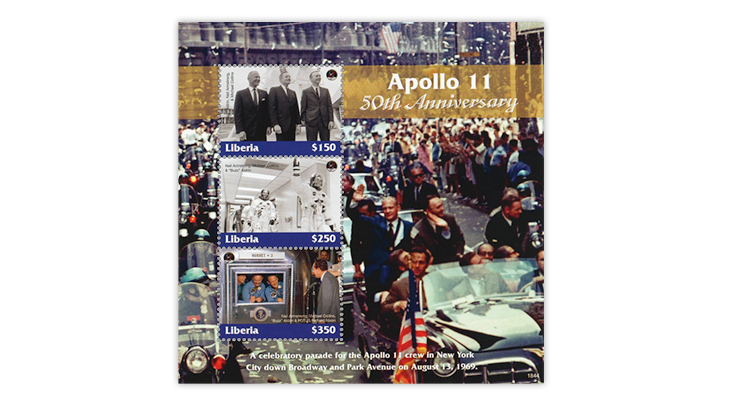 Liberia issued its stamps for the 50th anniversary early, in October 2018. The stamps depict the three Apollo 11 astronauts, and the selvage shows the New York City ticker-tape parade honoring their return.
Previous
Next

Many countries around the world are celebrating the 50th anniversary of the first manned moon landing on postage stamps.

Some of these stamps show photographs and drawings of the July 20, 1969, moon landing and scenes of the Apollo 11 mission, while other issues include images from other NASA missions to the moon.

NASA describes this photo on its website: “Astronaut James B. Irwin, lunar module pilot, gives a military salute while standing beside the deployed United States flag during the Apollo 15 lunar surface extravehicular activity (EVA) at the Hadley-Apennine landing site. … The Lunar Module (LM) ‘Falcon’ is in the center. On the right is the Lunar Roving Vehicle (LRV).”

Macedonia’s name change occurred Feb. 12, and the Moon Landing stamp was one of the first to include the new name. It is inscribed in three languages — Macedonian, Albanian and English, near the bottom of the design.

The Isle of Man issued a set of eight stamps April 29 called One Small Step 50 Years of Lunar Exploration. The stamps are in separate panes of eight.

In its presentation pack for the stamps, the Isle of Man Post Office said, “Our stamp issue commemorates the anniversary of the Moon landing, but also all the missions that led up to that one small step. In our stamps we have sought to show you the beauty of space, the Moon and the vehicles that took humanity to the Moon. Through subtle references and codes on the stamps (and within NASA guidelines) we have included those incredible NASA staff in Mission Control, the astronauts, the programs’ directors and those who gave their lives.”

The set begins with a stamp featuring the moon as “the target of the Apollo missions,” according to the Isle of Man Post Office.

Inscriptions on this stamp include the last names of President John F. Kennedy, James E. Webb (NASA administrator from 1961-68) and Robert R. Gilruth (the first director of the Manned Spacecraft Center) in the upper left and a quote from President Kennedy on the right, “We choose to go to the moon in this decade.”

The last two stamps in the set, each inscribed “RoW” for the international “rest of the world” rate, honor the first two manned moon landings: the Apollo 11 mission in July 1969 and Apollo 12 in November 1969.

Glazier Design designed the stamps. Among those assisting with technical information for the issue was George Abbey, a former director of the Johnson Space Center.

Guernsey and Jersey selected the July 20 anniversary date for their respective commemorative stamps.

Guernsey will issue four stamps in separate sheets of 20 and in a souvenir sheet with the designs se-tenant (side-by-side).

Bridget Yabsley, head of Guernsey Post's philatelic department, said: “We’re really excited to celebrate the moon landing’s 50th anniversary with stamps that depict some of the key moments — including the first footprint on the moon — from what is undoubtedly one of the most significant events in our history.”

The 65-penny stamp from Guernsey depicts the same photograph that is shown on one of the two United States forever stamps to be issued July 15. Taken by Neil Armstrong, the first man on the moon, the photo pictures Edwin “Buzz” Aldrin, the second man on the moon. Armstrong’s shadow can be seen reflected in Aldrin’s visor in this photo.

Six stamps from Jersey combine Keith Burns’ illustrations by of the Apollo 11 mission, from lift-off to splashdown, with headlines and quotes from the Jersey Evening Post.

In addition, Jersey’s set includes a souvenir sheet with a single £3 stamp featuring television coverage. More than half a billion people around the world watched Armstrong and Aldrin walk on the moon.

France will issue a €1.30 stamp July 19 to honor the 50th anniversary. The design by Alice Bigot is based on a photograph of Aldrin saluting the flag on the moon.

A single €1 stamp issued July 5 by Monaco presents Joel Tchobanian’s illustration of an astronaut and earth as viewed from the moon.

Spain’s souvenir sheet issued June 13 highlights different aspects of the Apollo 11 mission, including the involvement of the Spanish National Institute of Aerospace Technology. Technicians in the tracking station in the Spanish village of Fresnedillas de la Oliva were the first to hear Armstrong’s words, “The Eagle has landed.”

A quote by Armstrong is written in Spanish above the €3.50 stamp in the souvenir sheet. It translates to “Spain, whose history is full of discoveries, has helped us take this gigantic step for Humanity.

“Without the vital communications maintained between the Apollo XI and the space station Apollo Madrid in Fresnedillas, we can affirm that our landing on the Moon would not have been possible.”

In the lower left of the souvenir sheet, a black-and-white photograph shows Spanish engineer Jose Manuel Grandela working at the tracking station.

The stamp itself depicts Aldrin on the moon.

Spain’s post office, Correos, describes the souvenir sheet as a “triptych,” adding that when it is closed, it depicts “two sections of the moon and an antenna.” In addition, the souvenir sheet includes “augmented reality,” according to Correos.

Armstrong’s footprint on the moon and his photograph of Aldrin are among the images on the 1.80-franc stamp. The footprint is shown again on the 2fr stamp, which features the lunar lander.

Many other countries also have or will be issuing stamps for the anniversary.

Like some other countries, Liberia celebrated early, issuing stamps in 2018.