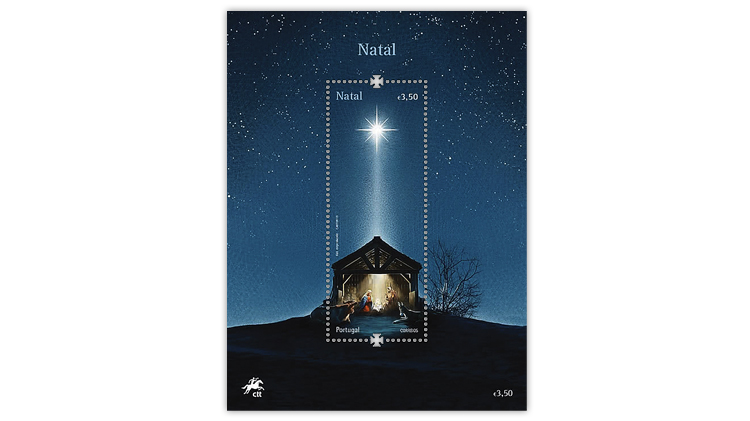 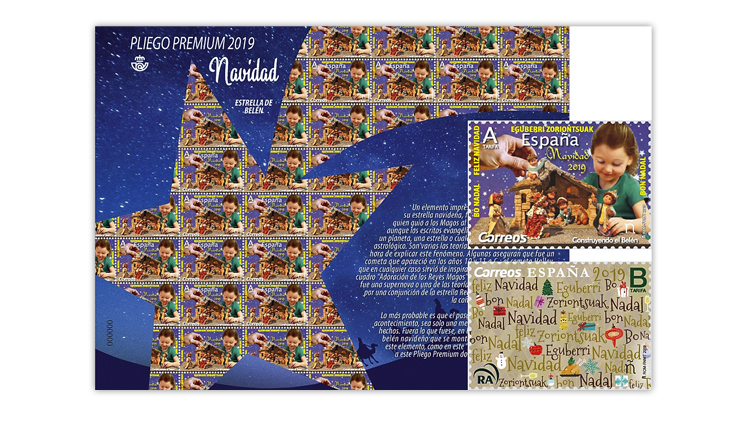 A souvenir sheet issued Nov. 5 by Spain shows the Star of Bethlehem as a comet. The star and comet’s tail are formed by an arrangement of 12 stamps (identified by the letter “A”) and partial images of the stamp. Spain's two Christmas stamps for 2019 are s 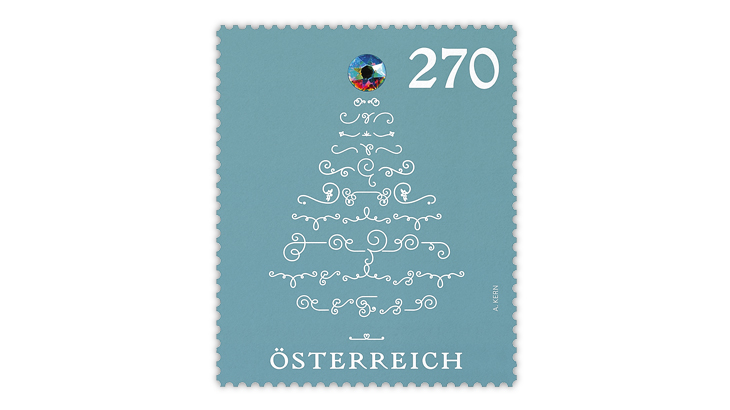 A crystal tops the tree on this Austrian Christmas stamp issued Nov. 8.
Previous
Next

The Star of Bethlehem shines extra bright on Portugal’s new Christmas souvenir sheet, thanks to a light-emitting diode that is activated by cell phone.

This is the world’s first postage stamp with an LED, according to an Oct. 22 press release from Portugal’s CTT (Correios, Telegrafos e Telefones).

The LED is part of the star at the top of the single €3.50 stamp in the souvenir sheet. The star’s light illuminates the baby Jesus, Mary and Joseph. An ox and a donkey are resting outside the stable.

The second chapter of the Gospel of Matthew (King James Version) begins with these two verses: “Now when Jesus was born in Bethlehem of Judaea in the days of Herod the king, behold, there came wise men from the east to Jerusalem,

“Saying, Where is he that is born King of the Jews? For we have seen his star in the east, and are come to worship him.”

Jorge Macedo designed the stamps and souvenir sheet. Cartor Security Printing of La Loupe, France, printed them by offset. The stamps are in sheets of 50.

The CTT provides more information about the stamps online, including details on how to activate the LED on the souvenir sheet.

The Star of Bethlehem is presented as a comet on Spain’s Christmas souvenir sheet issued Nov. 11.

In announcing this sheet, Spain’s post office, Correos, said that over the centuries experts have tried to explain the Star of Bethlehem, and that one theory was that it was Halley’s comet.

In addition to the souvenir sheet, Spain issued two nondenominated self-adhesive stamps in separate sheets of 50.

The “A” domestic-rate stamp (currently €0.60) shows a young girl playing with a Nativity display. The “B” stamp, which pays the rate for mail to Europe (€1.40), mixes symbols of the season with wishes for a merry Christmas in four languages spoken in Spain.

In the nearby publicity image from Correos, the two self-adhesive stamps are shown superimposed on the right side of the souvenir sheet.

The souvenir sheet includes 12 “A” stamps with moisture-activated gum, plus images of parts of the stamp’s design. This arrangement forms a five-pointed star that has a comet’s tail.

An embedded crystal tops a symbolic Christmas tree on a €2.70 Christmas stamp issued Nov. 8 by Austria.

Austrian Post described the design: “A glittering cut crystal adorns the top of this extraordinary, typographically designed Christmas tree and conjures a festive mood on your Christmas mail.”

Anita Kern designed this Christmas stamp, and Joh. Enschede of the Netherlands printed it by offset in sheets of 50.

Austria Post also issued four more Christmas stamps, two on Nov. 15 and two on Nov. 29. Two of the stamps, a €0.90 coil stamp and €0.80 sheet stamp, commemorate the 70th anniversary of the Christkindl post office near Steyr.