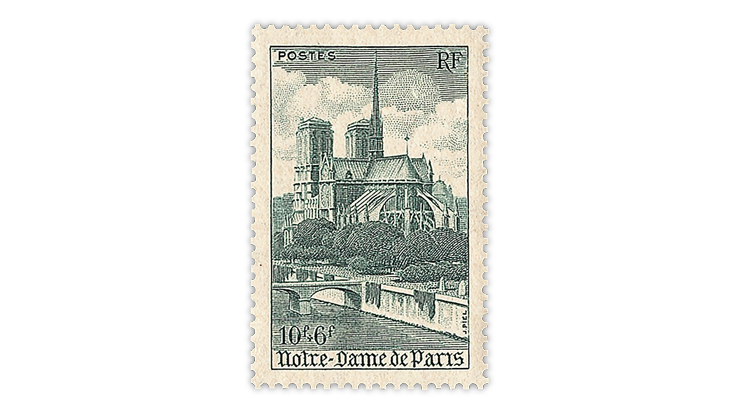 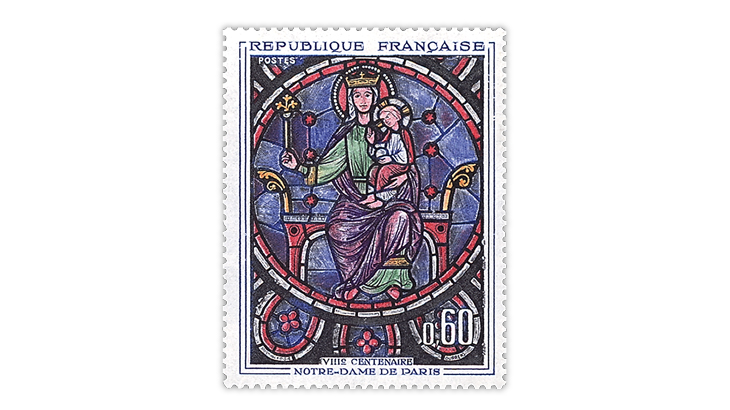 Figure 2. France commemorated the 800th anniversary of Notre Dame on this stamp issued in 1964. 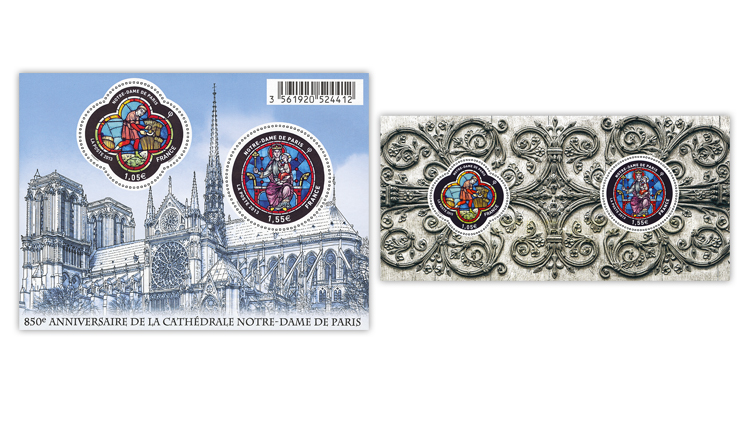 Figure 3. Two souvenir sheets celebrating the 850th anniversary of the cathedral were issued in 2013. They contain the same two commemorative stamps, but have different selvage designs. 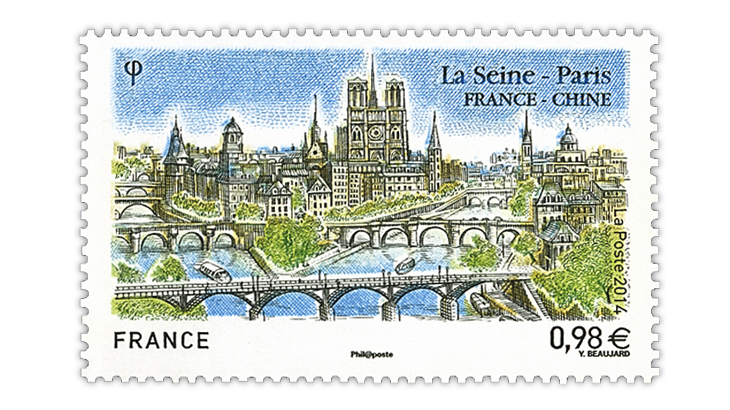 Figure 4. Notre Dame Cathedral dominates the background of the Seine River scene on this 2014 stamp. 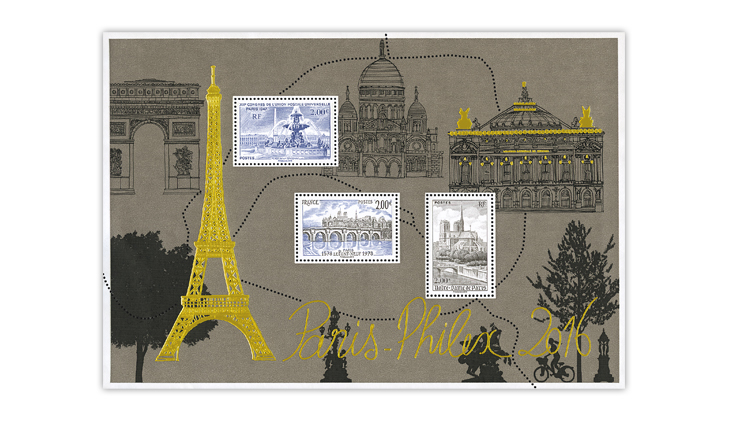 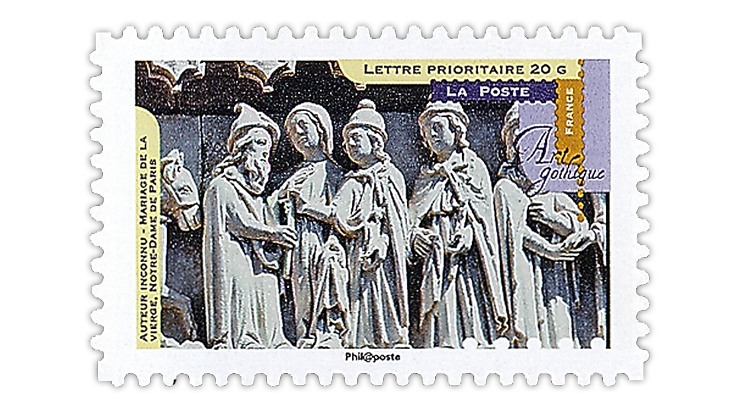 Figure 6. Notre Dame was represented on a stamp in a 2013 booklet focusing on Gothic art.
Previous
Next

The image of Paris’ Notre Dame Cathedral on fire was seen on television screens and computer screens around the world on April 15. While its spire collapsed, much of its facade still stands and French President Emmanuel Macron has promised to rebuild.

The more than 850-year-old cathedral has been pictured many times on the stamps of France. Figure 1 shows one of the most beautiful, the 10-franc+6-franc semipostal issued in 1947 (Scott B217).

Depicting the cathedral in a single color (dark gray green), the semipostal was designed and engraved by Jules Piel (1882-1978).

In 1964, France issued a single 60-centime stamp to commemorate the 800th anniversary of the cathedral (Scott 1090). Construction on the cathedral had actually begun 801 years earlier, in 1163 on the Ile de la Cite in the middle of the Seine. Construction wasn’t completed until 1345.

The 1964 commemorative, shown in Figure 2, features the Madonna and Child from one of Notre Dame’s three rose windows. According to news reports, all three windows survived the April 15 fire.

The stained glass windows are featured again on two stamps issued in 2013 to celebrate the 850th anniversary. The round 1.55 stamp shows the Madonna and Child. The 1.05 stamp, a quatrefoil, pictures a peasant with scythe.

Rather than specifically commemorating the cathedral, some French stamps include it as part of a Parisian scene. For instance, the 0.98 stamp in Figure 4 features the Seine River with the cathedral shown prominently in the background. Part of a joint issue with China, the stamp (Scott 4588) was released March 27, 2014.

A set of 1936 airmails with a design called "Plane over Paris" also shows the cathedral (Scott C8-C14). It is pictured once again on a 1947 airmail commemorating a Universal Postal Union congress held in Paris that year (C22).

Notre Dame is featured on one of five se-tenant stamps issued in 1989 (Scott 2150) presenting a panoramic view of Paris.

Similarly, it is one of four Parisian landmarks pictured on a stamp in a 2010 pane in the European Capitals series (Scott 3908b). The other landmarks are the Arc de Triomphe (3908a), the Palais Garnier opera house (3908c) and the Eiffel Tower (3908d).

The bottom stamp in the pane has the same design as the aforementioned 1947 semipostal, and the middle stamp reuses the design of a 1978 80c Tourist issue highlighting Pont Neuf across the Seine with the cathedral in the background (Scott 1599).

In recent years, France has issued booklets of self-adhesives on various subjects, some of which are related to the cathedral.

Stamps in a 2003 Red Cross booklet illustrate characters from French literature, including Esmeralda from Victor Hugo’s 1831 novel The Hunchback of Notre-Dame (Scott 2972).

Hugo’s novel played a major role in restoration of the cathedral after it was damaged and its statues beheaded during the French Revolution.

"Hugo’s wistful, achingly human tragedy of the hunchback named Quasimodo who both lives in and stands for the cathedral itself, ringing its iconic bells and offering sanctuary to a beautiful gypsy named Esmeralda helped spur on public support for the building that led to a major renovation in the 19th century," Andrew Lapin said in an April 16 report on NPR’s (website www.npr.org). "The gargoyles and the spire were added; the beheaded kings were re-headed."

In a 2006 booklet featuring foods of different regions, one stamp reproduces a photograph of a waiter working in an outdoor cafe with Notre Dame as the backdrop (Scott 3192h).

A stamp in a 2013 booklet dedicated to the theme of Gothic art (Scott 4460) depicts the frieze Marriage of the Virgin from the cathedral, shown in Figure 6. In addition, Notre Dame is represented on a stamp in the 2016 booklet that highlighted the art of stained glass windows (5148).

This isn’t a complete list of all the French stamps that depict the cathedral, and as President Macron hopes to have Notre Dame rebuilt in five years, no doubt many more will be issued in years to come.