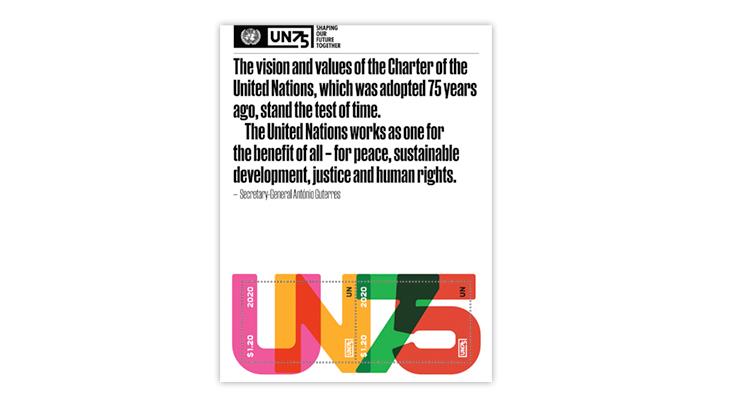 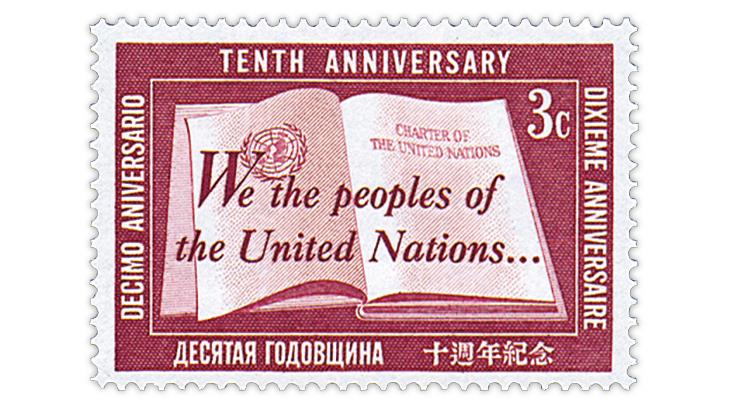 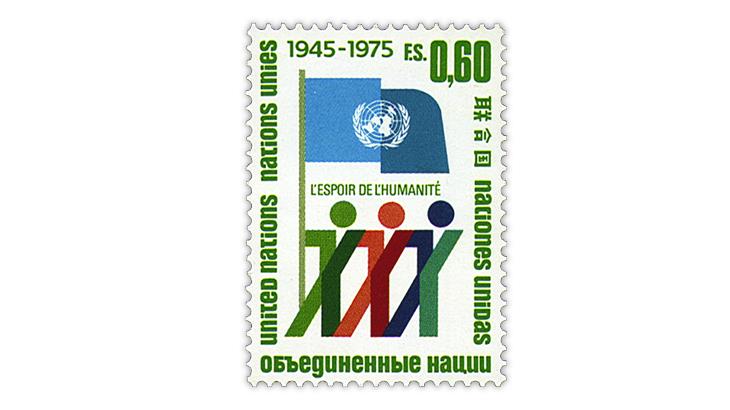 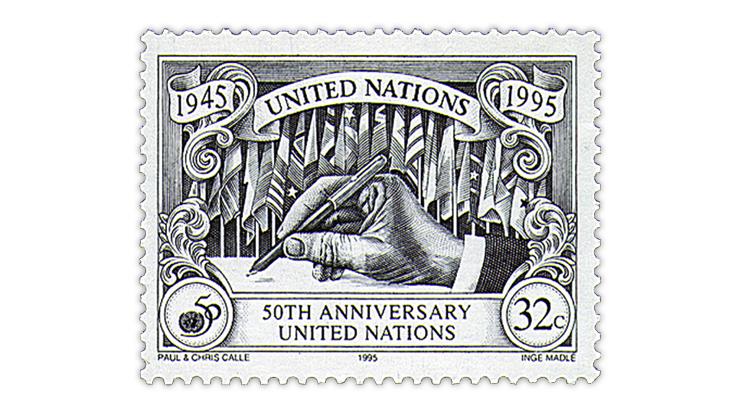 Father and son stamp designers Paul and Chris Calle created the designs for one of the three United Nations Postal Administration issues celebrating the 50th anniversary of the United Nations in 1995. 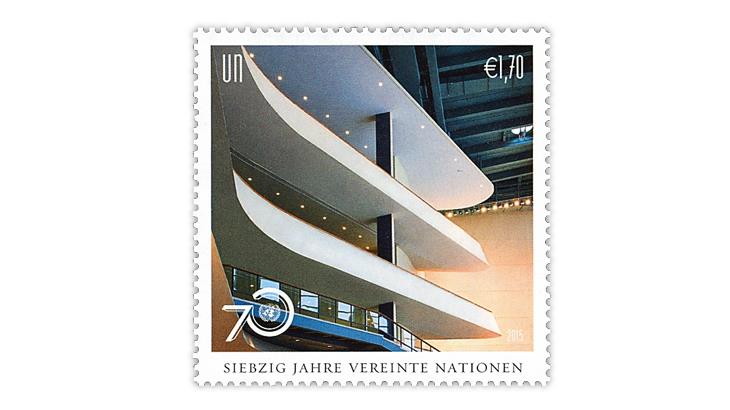 Photographs of the renovated U.N. headquarters in New York City are pictured on stamps issued in 2015 for the 70th anniversary of the United Nations. The visitors lobby is shown on this €1.70 stamp for use from the U.N. post office in Vienna.
Previous
Next

The day “marks the entry into force in 1945 of the UN Charter. With the ratification of this founding document by the majority of its signatories, including the five permanent members of the Security Council, the United Nations officially came into being,” according to the United Nations.

The United Nations marked its 75th anniversary at a virtual high-level meeting of the U.N. General Assembly Sept. 21.

At that meeting, world leaders adopted a declaration that the United Nations described as laying out “12 succinct commitments to reanimate global resolve: leave no one behind, protect the planet, promote peace, abide by international law, place women and girls at the centre, build trust, improve digital cooperation, upgrade the United Nations, ensure sustainable financing, boost partnerships, work with youth, and, finally, be prepared.”

“We are not here to celebrate,” world leaders said through the declaration. “Our world is not yet the world our founders envisaged 75 years ago.”

Each of the three 75th anniversary souvenir sheets contains two se-tenant (side-by-side) stamps with the initials of the United Nations on one stamp and “75” on the other. The stamps also include the 75th anniversary emblem.

The U.N. emblem also is shown in the selvage above the stamps along with the anniversary emblem and the slogan “shaping our future together.” The selvage prominently features a quote from Antonio Guterres, the ninth secretary-general of the United Nations.

The quote is in English on the souvenir sheet for use from the UNPA post office at the U.N. headquarters in New York City: “The vision and values of the Charter of the United Nations, which was adopted 75 years ago, stand the test of time. The United Nations works as one for the benefit of all — for peace, sustainable development, justice and human rights.”

The two stamps in this sheet are each denominated $1.20.

The souvenir sheet for use from the Palais des Nations in Geneva, Switzerland, contains two 2-franc stamps. One shows the “UN” initials in pink and green, and the other shows “75” in light and dark blue, green and yellow. The quote by Guterres is in French.

The third souvenir sheet, which is for use from the Vienna International Center in Vienna, Austria, includes the quote in German. On the €1.80 pair of stamps, “UN” is in orange and shades of blue and “75” is in dark blue, pink and shades of green.

The UNPA has commemorated previous anniversaries of the founding on the United Nations on stamps, beginning with the 10th anniversary in 1955. That issue included the opening text of the preamble of the U.N. Charter “We the people of the United Nations … ” in English on a 3¢ stamp, Spanish on a 4¢ stamp and French on an 8¢ stamp (Scott 35-37). A souvenir sheet included imperforate versions of the three stamps (38).

The preamble to the charter also was featured in the designs for the 15th anniversary in 1960 (Scott 83-85).

The new souvenir sheets marking the 75th anniversary were designed by Matt Willey of the design studio Pentagram.

The security printer of France’s La Poste printed the souvenir sheets by hexachrome, according to the UNPA. The quantities printed are 32,000 each of the $1.20 and 2fr sheets and 35,000 of the €1.80 sheets.