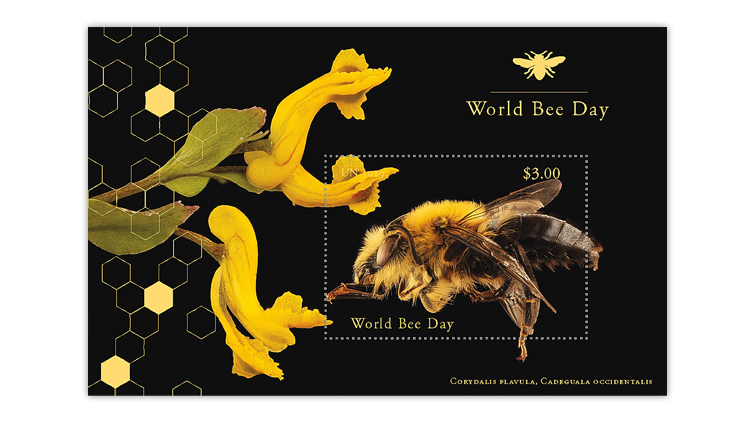 The United Nations Postal Administration is featuring bees and flowers on its souvenir sheets for World Bee Day, May 20. The souvenir sheet with a $3 stamp is for use from the post office at U.N. headquarters in New York City. 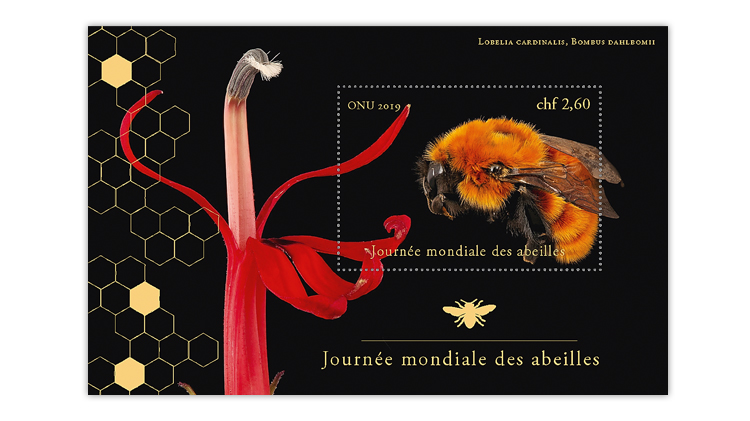 The World Bee Day sheet for use from the UNPA post office at the Palais des Nations in Geneva, Switzerland, pictures one of the world’s largest bumblebees. 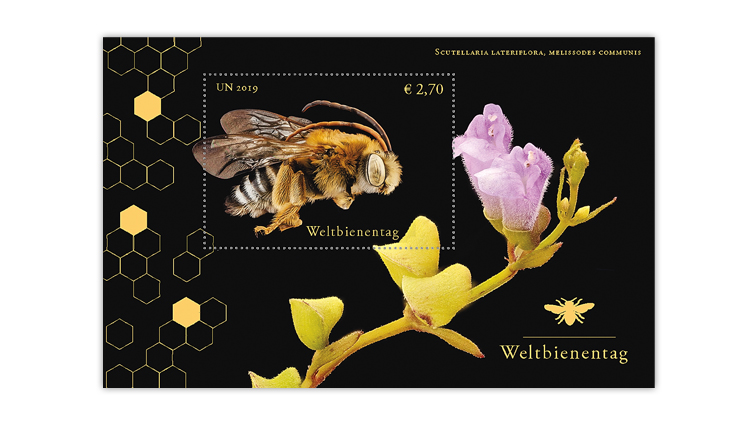 A long-horned bee, Melissodes communis, is shown on the World Bee Day souvenir sheet for the UNPA post office at the Vienna International Center in Austria.
Previous
Next

The United Nations Postal Administration is celebrating World Bee Day, May 20, with the release of three souvenir sheets featuring bees and flowers.

Each souvenir sheet contains a single stamp showing a photograph of a bee and part of a flower on a black background.

The souvenir sheet for use from the post office at U.N. headquarters in New York City depicts a diphaglossine bee, Cadeguala occidentalis, on the $3 stamp.

Part of the flower yellow fumewort (Corydalis flavula), also known as yellow harlequin and yellow corydalis, also is shown on the stamp, as well as in the selvage of the souvenir sheet.

Other images in the selvage include a honeycomb pattern on the left side and a silhouette of a bee above the words “World Bee Day” in the upper right. The scientific name of the flower and the bee are inscribed at lower right.

A South American bee, Bombus dahlbomii, is pictured on the 2.60-franc stamp in the souvenir sheet for use from the post office at the Palais des Nations in Geneva, Switzerland. Because of its large size (up to 1.5 inches in length), this bumblebee has been called “the flying mouse.”

The flower featured is Lobelia cardinalis. Commonly called the cardinal flower, it is a member of the bellflower family.

On this souvenir sheet, the scientific names are in the upper right, while the bee silhouette and World Bee Day inscription in French (Journee mondiale des abeilles) are below the stamp.

The souvenir sheet with a 2.70 stamp for use from the Vienna International Center in Vienna, Austria, is inscribed “Weltbienentag,” German for World Bee Day, in the lower right.

Text in the upper right identifies the flower as Scutellaria lateriflora and the bee as Melissodes communis.

As is evident in the photo shown on the stamp, Melissodes communis is a long-horned bee.

In his welcome statement online (www.usgs.gov), John French, the director of the Patuxent Wildlife Research Center, described it as “the nation’s first laboratory dedicated to wildlife research.”

The stamps measure 50 millimeters by 35mm each, and the souvenir sheets are 110mm by 70mm.

In December 2017, the U.N. General Assembly unanimously adopted the resolution proclaiming May 20 as World Bee Day. Slovenia led the initiative for this resolution “to raise public awareness about the importance of bees and other pollinators and the need to protect their natural habitat,” according to the UNPA.

May 20 was selected for the annual World Bee Day observance to coincide with the birth anniversary of Anton Jansa, a pioneer of modern apiculture. He was born in 1734 in Carniola, now part of Slovenia.