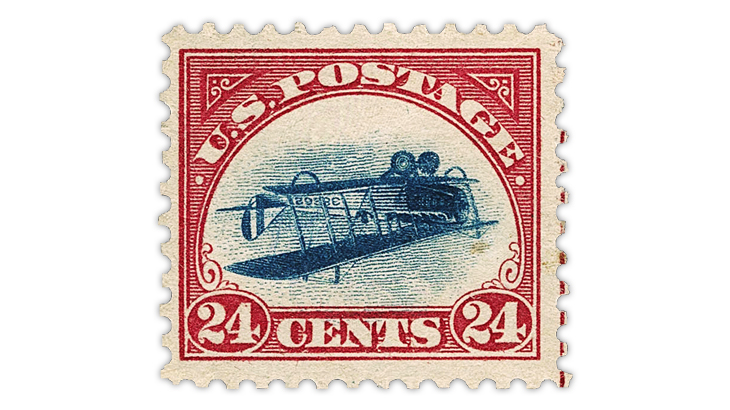 This example of the iconic 1918 24¢ Jenny Invert error is among the many United States stamps offered in the March 3-5 Robert A. Siegel public auction in New York City. 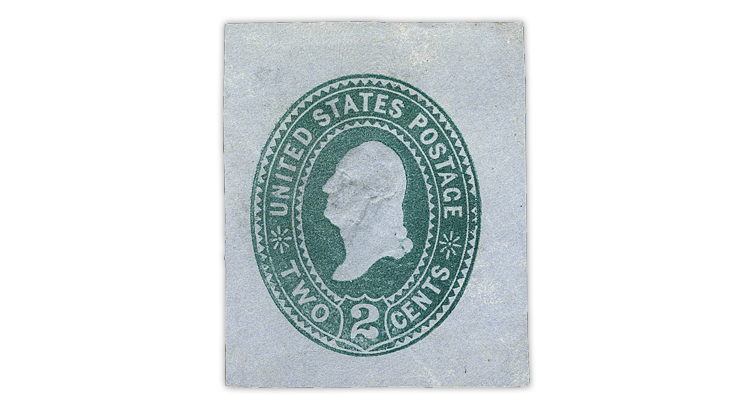 Another U.S. rarity in the upcoming Siegel sale is this unused cut square from the 1887 2¢ green on blue George Washington stamped envelope. Only one other unused cut square of this issue is known.
Previous
Next

One of America’s most recognizable error stamps is about to be auctioned in New York City.

The 1918 24¢ carmine rose and blue Jenny Invert airmail error stamp (Scott C3a) from position 95 on the discovery pane of 100 is included in the March 3-5 public auction from Robert A. Siegel Auction Galleries.

It’s part of a three-day sale that offers a broad range of United States material from the Gary W. Granzow 3¢ 1851-57 collection and the Ronald D. Bassey collection, plus postal stationery, revenue stamps, large lots and collections.

The dramatic Jenny Invert error, with its blue center vignette of the Curtiss Jenny biplane printed upside down, is a scene-stealer at any auction.

The example in this Siegel sale is described as having slightly disturbed original gum that is partly regummed at left covering small thins, with rich colors and “better centering than many in the sheet of 100, showing part of vertical centerline at right, small toned spots at right and natural diagonal crease.”

Siegel explains that the gum on this stamp has been inaccurately described for decades, with a description that incorrectly implied the entire stamp had been regummed. Siegel’s auction catalog description of slightly disturbed original gum quotes the revised Philatelic Foundation opinion from 2019.

The stamp was formerly part of the plate number and arrow block of eight, then part of the unique bottom row pair before that pair was divided and the bottom margin selvage removed some 65 years ago.

The 2020 Scott Specialized Catalogue of United States Stamps and Covers lists an unused Jenny Invert with a value of $450,000. The value is shown in italics to identify an item that can be difficult to value accurately.

The Siegel census of this celebrated stamp counts 87 known examples. The stamp in this auction is described as having choice centering and rich colors. The stamp face shows a neat railroad company manuscript cancel and X. The stamp has a few light creases, according to Siegel, which describes the issue as “one of the most beautiful stamps in all of philately.”

The auction opens with more than 140 lots from the Granzow collection of the 3¢ 1851-57 issue, including essays and proofs, perforation essays and trials, a first-day cover used from Baltimore, and much more.

Other U.S. stamp and postal history classics follow, beginning with early postmasters’ provisionals and a substantial number of proofs and stamps from the 1847 issue.