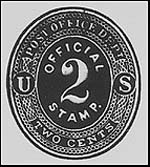 The term "Official mail" is used to describe mail sent by employees and officials of selected government agencies, including the Postal Service itself. Special stamps and postal stationery are created for use by these agencies, although in recent years most Official mail is paid for by postage meter stamps and permit imprints, much like what you find on most daily mail.

Postage stamps were first created for use on Official mail in the United States following an Act of Congress approved March 3, 1873.

It became apparent in the years following the Civil War that government officials were abusing the free-franking privilege that allowed them to send government mail using only their signature for postage.

In an attempt to curb these abuses, Congress abolished the franking privilege in 1873 and authorized the manufacture of Official postage stamps with distinctive designs for nine government departments: Agriculture, Executive, Interior, Justice, Navy, Post Office, State, Treasury and War.

The theory was that the designation of specific postage stamps would establish greater accountability for each department.

The first Official stamps were printed by the Continental Bank Note Co. using the same vignettes (central designs) as the regular-issue stamps of 1870.

The Official stamp includes the name of the department ("Executive") in an arch across the top of the portrait and other minor changes around the frame.

The colors of the 1870 regular postage stamps were determined by the denomination of the stamp: the 1¢ was blue, the 2¢ was red-brown, the 3¢ was green and so on.

The colors of the Official stamps (or departmentals, as they have sometimes been called) were determined by the stamps' department designation: all Executive stamps were carmine red, all Navy stamps were blue, all Treasury stamps were brown and so on.

The oddballs of the group, the stamps of the Post Office Department, were printed in black with no portrait. Within the oval vignette frame was only a large numeral of value and the words "OFFICIAL STAMP."

Official-mail stamped envelopes were created at about the same time as the departmental stamps.

The envelopes were created with several denominations and were designated for use by the Post Office Department and the War Department.

Figure 2 shows the stamped portion of Scott UO1, the 2¢ Post Office Department envelope that is the first Official envelope listed in the 1999 Scott Specialized Catalogue of United States Stamps and Covers.

In 1875 Continental Bank Note created a set of ungummed Official stamps with each issue overprinted with the word "Specimen."

Some of these special printings are among the most valuable U.S. Official stamps. Some of the higher dollar value issues sell for thousands of dollars apiece.

In 1879 the American Bank Note Co. printed selected values of the Official postage stamp series using the same designs as the earlier set.

The practice of using Official stamps and envelopes was discontinued in 1884, though most of the stamps were supplanted by the use of penalty envelopes as early as 1879.

Such envelopes bore a printed message declaring that they were intended for Official use only and that illegal use would result in a penalty (fine).

In 1910 Congress approved a new series of Official stamps for use by administrators of the U.S. Postal Savings program. The stamps bore no portrait but instead included the words "OFFICIAL MAIL" within a central oval.

In 1983 a new style of Official mail stamp appeared, depicting the Great Seal of the United States and including the words "Official Mail USA" across the top of the stamp.

The design of the Official mail stamp today is very similar to those 1983 issues.

Although modern Official mail stamps have been available for 16 years, they are only infrequently found on covers from a limited number of agencies. It is much more convenient for most federal offices to make use of Official postage meters or Official permit-imprint envelopes.

As a result, collectors should save intact any covers bearing postally used Official mail stamps. Examples showing the agency where the mail originated and the date of mailing are of greater value than a single postally used stamp soaked off a cover.

Official mail postal cards and stamped envelopes with designs that match the new series of stamps were also issued in 1983. The 1995 32¢ Official Mail envelope is shown in Figure 4.

Official mail stamps and postal stationery are used by many countries around the world.

Some nations create special designs for these items in the same way that the United States does.

Many other nations have used overprints on regular-issue postage stamps to mark them for Official use only.

Figure 5 shows Scott O4 from Basutoland, a highly prized 6-penny Official stamp from 1934. The word "OFFICIAL" is printed across the stamp in black letters.

Similar overprints used by countries in the British Commonwealth also include such overprints as "O.S." (for "Official Service"), "Service," "O.H.M.S." (for "On His [or Her] Majesty's Service") and others.

Other nations around the world often use designations in their native languages to identify Official issues.

Official stamps from around the world are listed in the Scott Standard Postage Stamp Catalogue, following the listings for the standard postage stamp issues for each country.