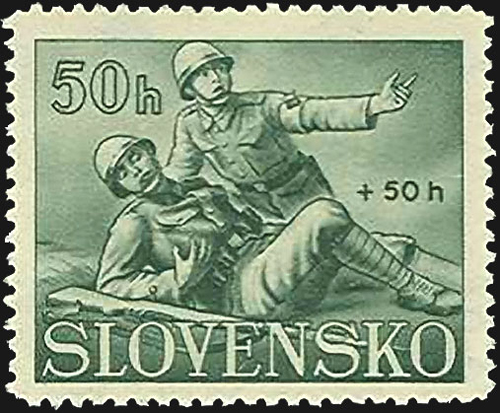 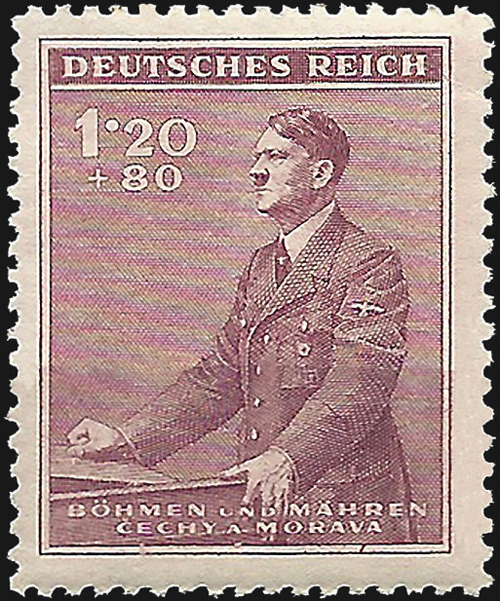 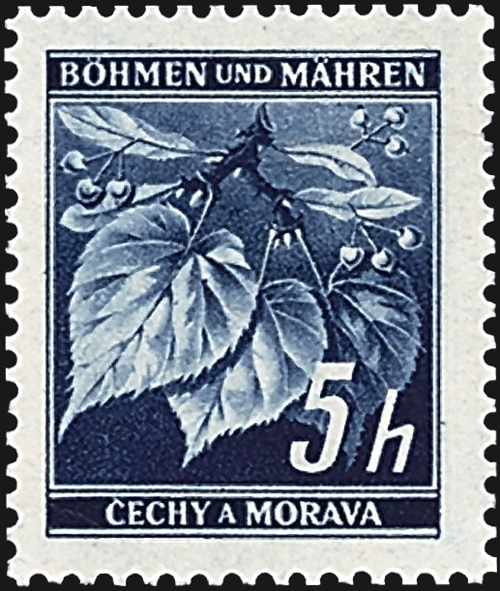 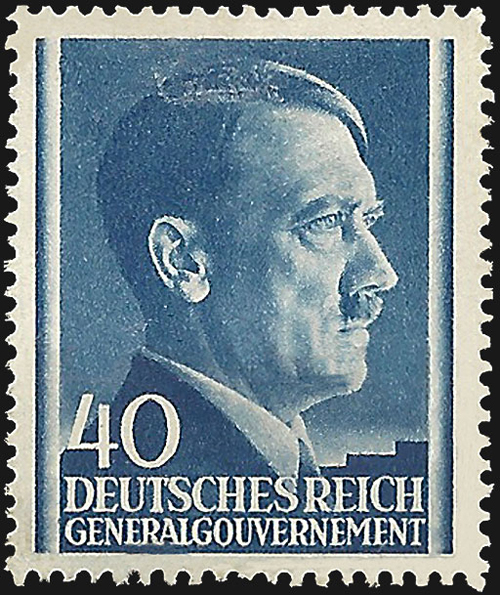 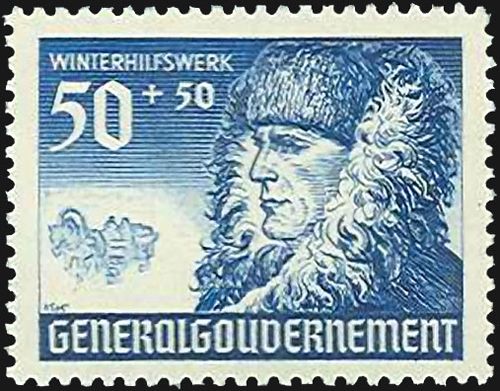 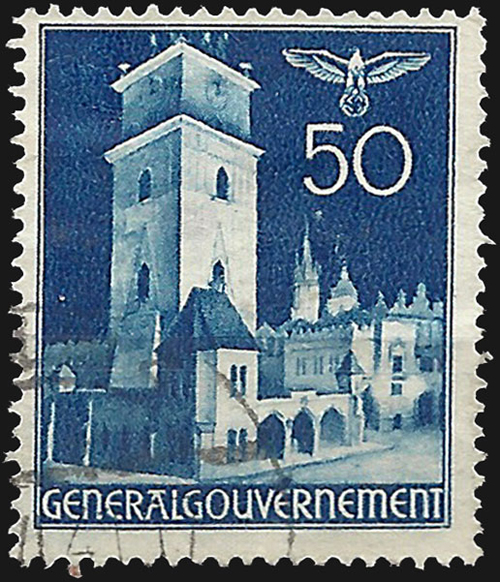 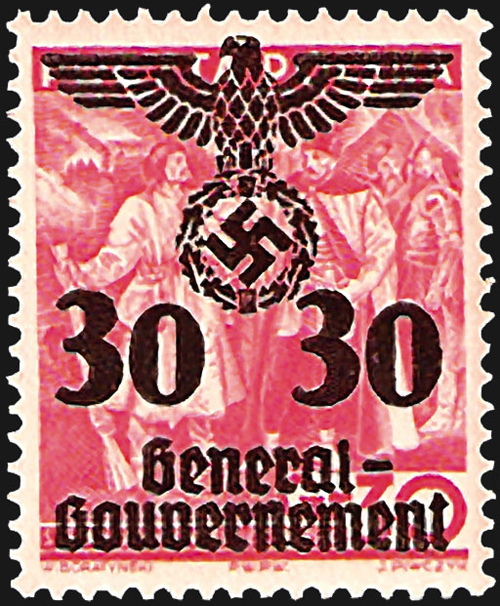 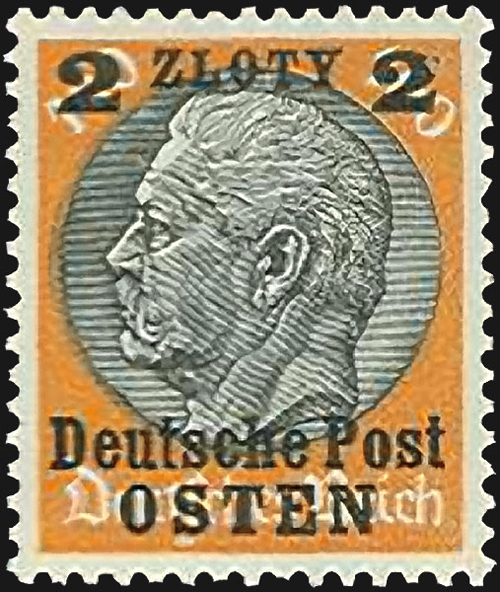 On Sept. 17, under the secret provisions of the Nazi-Soviet Non-Aggression Treaty, the Soviet Union invaded Poland from the east. By Oct. 6, 1939, Poland was defeated and its territory was parceled out between Germany, the Soviet Union, Slovakia and Lithuania.

On June 21, 1941, Germany invaded the Soviet Union, quickly recouping the parts of Poland that it had encouraged the Soviets to occupy in 1939.

The part of Poland that had belonged to Germany before World War I was absorbed directly into Germany. The remaining south central part of Poland, including Warsaw and Krakow, was occupied under the name General Gouvernement and divided into military districts with civil and military administrators. Its governor general, Hans Franck, played a leading role in the Holocaust and was one of the high-ranking Nazis convicted of war crimes and crimes against humanity in the Nuremberg trials. He was hanged Oct. 16, 1946.

These were followed in March 1940 by Polish stamps of the 1937-39 issue heavily overprinted by "General Gouvernement" and the eagle clutching wreathed swastika symbol of Nazi Germany. A 30-groszy-on-30g occupation stamp (Scott N41) is shown in Figure 2.

Stamps specifically designed and printed for the General Gouvernement were first issued in August 1940. This series featured buildings and monuments of Krakow, Lublin and Warsaw. A 50g Court House in Krakow occupation stamp (Scott N68) is shown in Figure 3.

Thereafter, a flood of new stamps was released. Many were semipostals, most of which were issued to raise funds in support of German war efforts. The design of the 50g+50g semipostal stamp (Scott NB11) shown in Figure 4 depicts a German peasant kitted out for wintery weather. The stamp is inscribed "Winterhilfs-werk" (winter relief).

Like other occupation stamps, these appear after the regular postage stamp listings in what is called the back-of-the-book section of the Scott Standard Postage Stamp Catalogue.

After the war, Poland had the misfortune to be liberated from the Germans by the other half of the team that dismembered it in 1939. To keep their territorial acquisitions from 1939, the Soviets redrew the map of Poland, shifting its borders 100 kilometers to the west at the expense of Germany. Populations were relocated in accordance with the new borders.

Many countries were occupied by the Axis powers during WWII. Abandoned by its faithless allies, Britain and France, at the Munich Conference of 1938 and facing invasion and annihilation, Czechoslovakia capitulated to Germany without a fight. On March 14, 1939, the Slovakian part of the country declared its independence from Prague and became a German satellite. On March 15, 1939, the Czech part of Czechoslovakia became the German protectorate of Bohemia and Moravia.

Hitler was also portrayed on stamps of Bohemia and Moravia. Figure 7 shows a 1.20-koruna+80h Adolf Hitler semipostal stamp (Scott B11) issued in 1942 to honor Hitler's 53rd birthday and raise funds for the war effort.

Because Slovakia was not occupied by Germany, its stamps issued from 1939 to 1945 are not listed as occupation stamps in the Scott standard catalog, but are listed under Slovakia, ahead of stamps issued after Slovakia regained its independence on Jan. 1, 1993.

Shown in Figure 8 is a Slovakian 50-halierov+50h Medical Corpsman and Wounded Soldier semipostal stamp (Slovakia Scott B2) issued in 1941.

WWII was by any measure one of the most disastrous events in human history. From 1939 to 1945, most of the world was at war. All war did not end in 1945. Nations still invade and occupy other nations. Some countries have been occupied more than once and by more than one country’s military forces. Collecting the stamps from the occupations is a peaceable way to learn about and remember the devastating effects of war.