What makes a cover worth what it's worth? 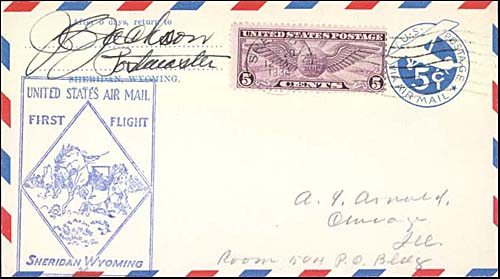 This first-flight cover from Sheridan, Wyo., is autographed by the postmaster. Does the autograph affect value? 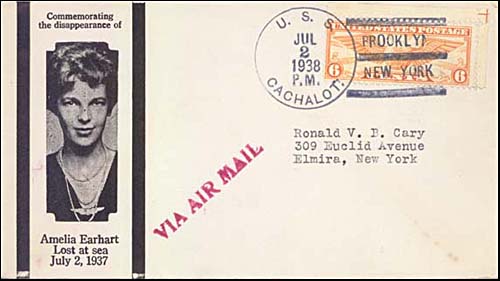 This cover appeals to a collector interested in airmail or U.S. Navy postmarks. If priced right, it would easily find a buyer in the stamp hobby. A collector in a broader collecting field might pay more for it. Do you know what field? 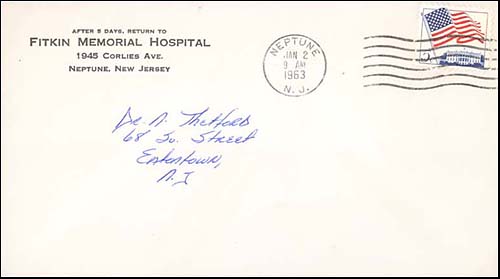 Not as pretty as the cover shown in Figure 5, this cover is worth saving because it is an early use of the 5¢ Flag stamp issued Jan. 9, 1963. The cover is postmarked Jan. 2. 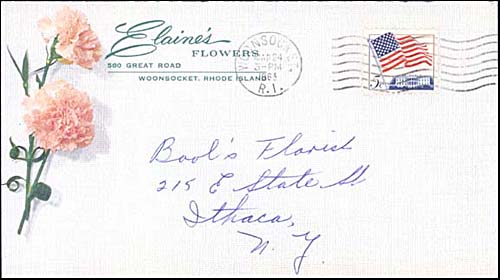 This pretty cover postmarked March 24, 1963, shows a common use of the common 5¢ Flag stamp issued Jan. 9, 1963. The colorful business envelope is interesting because it is small in size and because it looks nice and is clean. 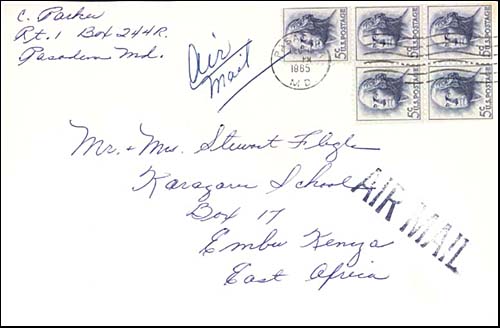 The ordinary 5¢ Washington stamps make this cover special because they are from a booklet pane that included five stamps and a label. The label was not used. The five 5¢ stamps paid a correct airmail rate to Kenya, a scarce use. 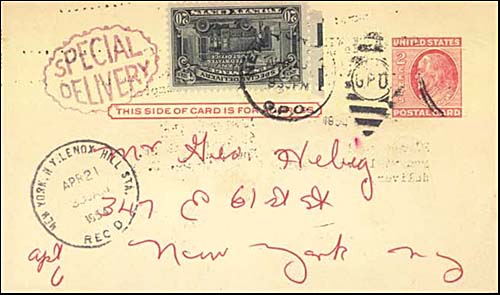 The 20¢ special delivery stamp on this very common postcard used in 1954 makes this a valuable card. The reverse side tells a man when his new suit will be delivered. 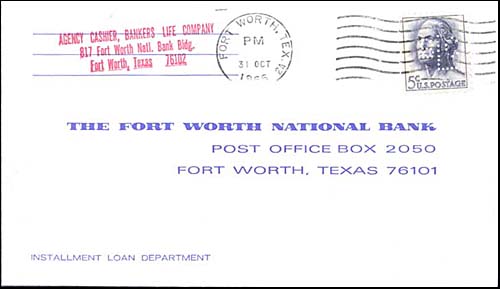 This cover from 1966 is interesting because it bears a stamp with perforated initials, "BLC" for Bankers Life Co.
Previous
Next

Demand makes a cover worth what it's worth. A collector willing to pay cold, hard cash for a cover (rather than for some other toy) is what makes the marketplace work. This is true for stamps as well as for covers. The value of a cover is related in part to the value of a stamp, which is worth what a buyer (usually an informed buyer) is willing to pay.

For a common cover, a good benchmark today would be about $1. Maybe the cover benchmark is really 25¢ or 50¢ or maybe $2, but using $1 will keep this discussion simple. It would be stretching it to use $3 or $5, and it would be far too low to use 20¢.The Scott Standard Postage Stamp Catalogue says that the minimum retail value of a common stamp is 20¢. The Brookman United States, United Nations & Canada Stamps & Postal Collectibles price guide uses 15¢. The reality is that common stamps are for sale for about 5¢ each up to about 25¢ each, but 15¢ or 20¢ is a good benchmark for a common stamp.

The 1966 cover pictured in Figure 1, franked with an undamaged 5¢ George Washington stamp of 1962, is probably worth at least a few dollars at retail, say $2 or $3. But it's certainly not worth $100. In fact, no cover pictured on this page is worth $100. What is unusual about the Figure 1 cover is that the stamp is perforated with the BLC initials of the Bankers Life Co. The envelope was sent by the company's office in Fort Worth, Texas (handstamped as the return address). The envelope and stamp match, so the use can be considered commercial.

Collectors of perfins, as such stamps are called, are organized as the Perfins Club, an international collector group with 640 members. The club publishes a catalog that identifies perfins and gives scarcity ratings for off-cover stamps. However, the catalog gives no values or prices.

Where does demand come from? And what makes one cover retail at $3 but another sell for $300 or $3,000? An organized club and a catalog can spur interest in a collectible and help build demand. Other collectors hear about the collecting area, talk about it with friends, get the catalog and the word spreads, building demand.

When demand reaches a certain level, such that the available supply is under great buying pressure, then prices rise. Experienced dealers are able to smell this sweet demand when it is still fresh, and they can adjust their stocks and prices to take advantage of it. Mail requests, questions at shows, and the recorded action online on eBay help them feel the wave.

It's an inexpensive cover because, although the supply of such covers likely is small, the demand or the potential for demand also is minimal. Inexpensive covers such as the 5¢ Washington perfin cover typically are bought and sold at stamp shows or online. At shows, collectors look through boxes to find them. Online, potential buyers view a scan before they buy or bid.

Collectors of U.S. postal cards, another group of organized collectors with up-to-date catalogs, know that the combination of the relatively common card and a special delivery stamp is desirable. It's special enough to retail for $20 or $30 or maybe even $50 on a good day. The card is a commercial use by a New York firm informing a man that a new suit and other items will be delivered the next day.

Figure 3 shows a cover bearing more of the common 5¢ Washington stamps of the 1960s. This cover is unusual because the stamps are an intact block from a booklet pane that included five stamps and a label. The label was removed and not affixed. The five 5¢ stamps paid the correct 25¢ airmail rate to Kenya, a difficult destination to find. The cover is worth about $15, maybe more.

Figure 4 shows a pretty cover postmarked March 24, 1963, a common use of the common 5¢ Flag stamp issued Jan. 9, 1963. The colorful flowery business envelope is interesting for three reasons: because it is small in size, it looks nice and is clean. Priced at $1 it would sell. At $5 it probably would sit for a long time. But you never know — because being pretty creates demand too.

Figure 5 shows a cover bearing another 5¢ Flag and White House stamp. The cover was sent from a hospital to a doctor. Although the Figure 5 cover is rather plain-looking, it is worth saving because it is a use of the 5¢ Flag stamp before it was officially issued Jan. 9, 1963. The cover is postmarked Jan. 2. It is unknown if this is the earliest use, but priced at a few dollars this cover probably would sell quickly to a U.S. cover collector or maybe to a first-day-cover collector who also likes early-use covers. A fanatic might pay $10 for it.

The striking cover pictured in Figure 6 could appeal to a collector interested in airmail (the 6¢ Winged Globe stamp) or U.S. Navy postmarks (the Brooklyn Navy Yard postmark of the submarine USS Cachalot). If priced right for the cover market (maybe $10 or $20), this 1938 cover would find a buyer, perhaps a thematic collector interested in whales (cachalot means sperm whale) or a Navy cover collector. But the cachet (added design) on this cover pictures and memorializes aviator Amelia Earhart on the first anniversary of her disappearance.

In the market for historical aviation collectibles, I am told, this cover is worth about $70. In other words, the context of where an item is offered for sale (the audience that sees it and might buy it) affects what it might bring. What's working for this cover is time, another great creator of demand. As the 100th anniversary approaches of the four Dec. 17, 1903, flights of the Wright Brothers Flyer, interest in and demand for many airmail covers, steady and strong since before World War I, grows ever stronger. Airmail is another field with a strong collector group (the American Air Mail Society, membership 1,630) and strong literature, including priced catalogs created by AAMS members.

Figure 7 shows a 1934 first-flight cover from Sheridan, Wyo., autographed by the postmaster. The AAMS catalog (1990 pricing supplement) values the cover at $3 northbound, $8 southbound. I'm not sure which way the cover flew, but the autograph is immaterial to its value. Or is it? What do you think this cover is worth?