Worldwide stampless covers can teach you a thing or two 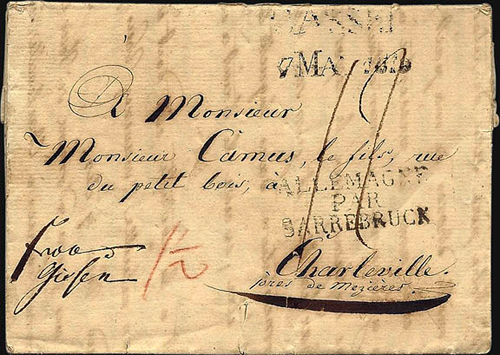 Figure 2. A French stampless cover dated May 5, 1816. It was mailed from Cassel to Charleville with the mysterious routing instruction, "Germany by Sarrebruck." 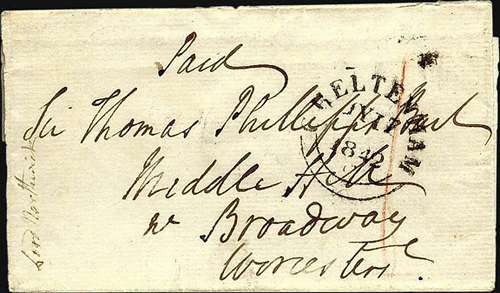 Figure 1. This British stampless cover is a wrapper mailed in Cheltenham, England, on July 17, 1842.
Previous
Next

The April 11 Refresher Course concentrated on United States stampless covers and how to decipher the various markings found on them.

This column will further explore collecting stampless covers from other countries. The challenge comes in finding information about the postal markings that is usually not available in stamp catalogs.

Figure 1 illustrates a stampless cover from Great Britain in 1842. This one does not contain a folded letter, but by the way it is constructed it appears to have been a wrapper – a piece of paper that was wrapped around another paper item. It could have been used to mail a flyer, magazine or newspaper. We will never know, because all that exists now is this piece of paper, folded and sealed at the back with both sides open.

This is, nevertheless, interesting from both social and philatelic perspectives.

Great Britain issued the world's first adhesive postage stamp in 1840, but this wrapper is not franked with stamps: Why?

There are some interesting clues readily seen on the front of this wrapper. The first clue is the word "Paid" written in the same hand as the address. So the "Paid" was written by the sender. What gave the sender the right to do this?

The next clue is the handwriting that runs up the left side of the wrapper. It is small and faint, but still readable. It says "Lord Northwick." This was probably written by the recipient to make note of who sent the item.

Such notations are called docketing. To give further credence to who the sender was, the cover is postmarked Cheltenham, England, July 17, 1842.

Cheltenham was the home of John Rushout, second Baron of Northwick, also known as Lord Northwick, who was born in 1770 and died in 1856. He was a peer and member of the House of Lords. Because of that, he received the free franking privilege as a benefit of his rank. This means he did not have to pay postage to mail letters.

The addressee turned out to be a person of interest as well. The wrapper is addressed to Sir Thomas Phillipps, Middle Hill at Broadway, Worcester. Phillips was a first baronet and renowned for his collection of books and manuscripts. He is credited with having formed the largest collection of manuscripts in the 19th century.

The wrapper makes even more sense with that piece of information. Lord Northwick was also a collector of renown. His passion was paintings, miniatures, coins, books, and apparently anything else that was not nailed down. He lived at Thirlestone House in Cheltenham.

The house still exists, an imposing structure in Gloustershire. A complete catalog of the masterworks collected by Lord Northwick is available from Google Books as a free download. Check http://books.google.com and search for "John Rushout Northwick paintings catalog."

It is amazing what one can learn from a single stampless cover.

Figure 2 shows a French stampless letter. The letter is dated Cassel, May 5, 1816, and it is signed with "Your very devoted and affectionate" (votre devoue et tres affectionis), but the signature is unfortunately illegible.

The postal markings are numerous. There is a "Cassel, 7 Mai 1816" handstamp in black at the upper right corner. About midway below that is another handstamp that reads "Allemagne Par Saarebruck."

There are two handwritten rate markings; one on the right side that appears to be "19" but which could be something else entirely, and another on the bottom left side in red that is "1½."

Knowing very little about early French postal rates or routes, I looked for help in books and catalogs I have in my philatelic library.

Although I located interesting information about ship mail from, to or transiting France, the letter in Figure 2 is domestic, sent from Cassel to Charleville.

Cassel is in the Houtland region of the Flanders Plain. It is in the Nord-Pas-de-Calais region, the department of Nord and the arrondissement of Dunkirk.

Charleville lies about 100 miles east of Cassel in the Champagne-Ardenne region, the Ardennes department, and the Charleville-Mezieres arrondissement.

I was getting confused, and that means I needed help. I called up the web site of the American Philatelic Research Library (www.stamplibrary.org) and clicked on "Online Catalog." The catalog search screen came up, and in the "any word" box I typed "stampless" and in the "subject" box I typed "France."

Perhaps I could have narrowed the search further by adding more search terms, but I was not really sure what I was looking for. A list of 17 available publications that met my criteria popped up when I clicked the "submit query" button.

I clicked the link that said "Full Display" and read more about what this was. It is color photocopies of an exhibit about the subject. From this screen I could click the "Add to Cart" link for the items I wanted to borrow, and later check out. Soon the publications would be mailed to me. There is a fee for this service, but worth the price to learn about the tricky items in one's collection.

This list will undoubtedly be longer by the time I get there, because I will be searching for additional helpful publications about rates and routes. I'm puzzling about why a letter sent from Cassel to Charleville would be routed well south of the destination to "Allemagne par Saarebruck" (Germany by Sarrebruck).

Sarrbruecken (the German spelling) is the capital of the German state of Saarland. It is situated near the French-German border, just south of Luxembourg.

The long, chatty letter is written in French and discusses what must be family members, mutual friends and health matters, giving little clue to the identities of the sender or recipient.

Collecting stampless letters can be very challenging. With the right tools and some detective work, the task of determining rates, routes and the social aspects of stampless covers can be accomplished. It just takes the three Ps of philately: persistence, practice and patience.