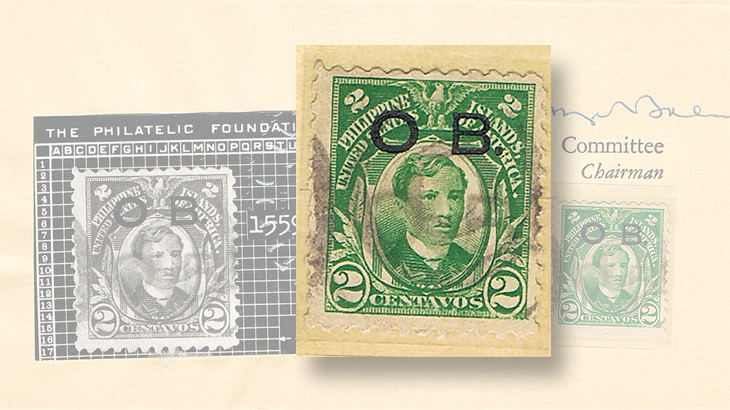 United States possessions overprints are often candidates for expertizing. This Philippines 1931 Official stamp with what looks like the variety with no period after the “O” (Scott O5b) turned out to be a counterfeit when sent in for expertization in 1962. 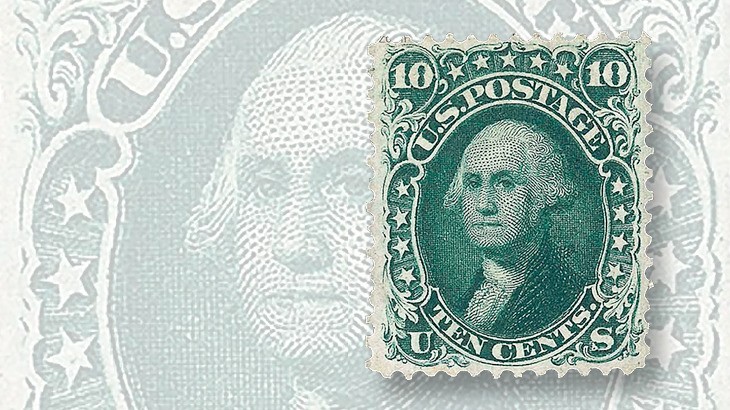 This 1861 10¢ dark green George Washington stamp (Scott 62B) has been the subject of four expertizing efforts, each with a different result. It was sold in a November 2014 Robert A. Siegel Auction Galleries auction.
Previous
Next

[Editor's note: This is the first part of John Hotchner's monthly column on expertizing. Part II: The word 'almost' does not appear on expertizing certificates]

Expertizing certificates often tell you more than the primary fact you wanted to know: genuine or not genuine. They also note other findings related to the condition of the stamp — or whether aspects of a genuine stamp have been “improved.”

This is by way of preface to a stunning listing found by Linn’s reader Alan Bush in the Robert A. Siegel Auction Galleries Nov. 5-6, 2014, auction:

This listing is a classic! The stamp under discussion is shown nearby. I won’t venture to second-guess the experts who reviewed the stamp — expertizing from a photograph is always bad practice — but I will say that reperfing can be a difficult thing for experts to get right.

Many efforts at reperfing, or adding perforations, are so poorly done that they are easily discernible. But others can be so good that they are virtually undetectable. This all tracks back to the subjective nature of findings.

Remember that the result of expertizing is called an “opinion.” It may be an opinion with 100 percent certainty, or it may be based on an educated guess with nothing found to contradict it.

Yes, nothing should go on a certificate that is not based on at least the preponderance of positive evidence, but we are dealing with human beings who can sincerely believe what is not so. That is one reason why I favor having multiple expertizers review a patient (the stamp or cover being expertized) before an opinion is issued.

In the case of the Scott 62B stamp shown nearby, the basic stamp is genuine (there was no dissent on that), and whatever flaws it may have, it is otherwise sound and visually attractive. Its flaws may make it unacceptable for some collectors to include it in their albums, while others would be happy to have it.

The lesson here is that a stamp you feel certain is likely genuine need not be perfect for it to be worth sending in to get a certificate. Also, even though the certificate notes flaws, the stamp should not be relegated to the trash heap. The realization on this example of Scott 62B was $700.

There are very few overprints on U.S. postage stamps, but they have been faked often enough that those with value (mainly the 1929 Kansas-Nebraska and the 1928 Hawaii Statehood anniversary overprints) are good candidates for certificates.

U.S. possessions are another matter. Whether Canal Zone, Cuba, Danish West Indies, Guam, Philippines, Puerto Rico or the Ryukyu Islands, some of the early issues have overprints, and they need to be expertized.

In the Philippines, postage stamps of 1917-25 were overprinted “O.B.” (for official business) to be used as Official stamps. Varieties exist. One of these, the 1931 2-centavo green with no period after “O” (Scott O5b) is listed at $30 used in the 2015 Scott Specialized Catalogue of Stamps and Covers. In 1962, when the stamp shown nearby was submitted to the Philatelic Foundation, it had a Scott catalog value of $2 used. As indicated on the certificate, the overprint was found to be counterfeit.

Even common overprints were faked for use in packets.

Collectors can check against known genuine overprints for color of overprint ink, shape and consistency of letters and numbers, and angle/placement of the overprint, to get a good idea of whether the candidate is genuine or not, but the definitive method is to submit the stamp for expertizing if there is any doubt. There are many dangerous fakes out there.