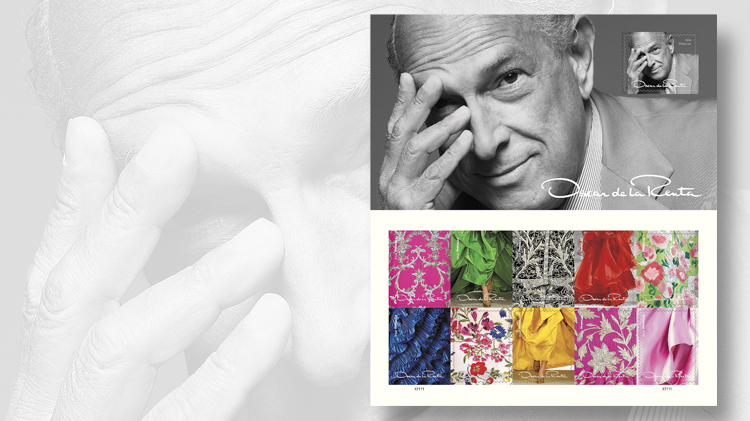 A New York Times report states that Hillary Clinton will speak at a Feb. 16 ceremony in New York for the Oscar de la Renta forever stamps.

The New York Times has reported that former Secretary of State Hillary Clinton will speak at a Feb. 16 ceremony “to mark the issuing of a stamp honoring fashion designer Oscar de la Renta, a close family friend.”

Sec. Clinton’s appearance at the ceremony has not been confirmed by the United States Postal Service. According to Holson’s article, the ceremony will take place at Grand Central Terminal in New York City.

As first lady of the United States in 1998, Clinton participated in the first-day ceremony for the Breast Cancer Research semipostal stamp (Scott B1) on July 29. As U.S. Senator in 2003, she took part in a ceremony in Newburgh, N.Y., to welcome the 37¢ Purple Heart stamp issued May 30 (Scott 3784).

“Clinton and de la Renta first met at a Kennedy Center Honors reception during President Bill Clinton’s first year in the White House, and the first lady and the designer grew close,” Alex Seitz-Wald reported for MSNBC in 2014, shortly after de la Renta’s death at age 82.

Linn’s Stamp News reported Jan. 6 that the famous fashion designer would be honored with a single pane of 11 forever stamps that includes a single stamp picturing de la Renta in a black-and-white photograph, and 10 additional stamps that show “details from several of his most exquisite gowns,” according to the Postal Service.