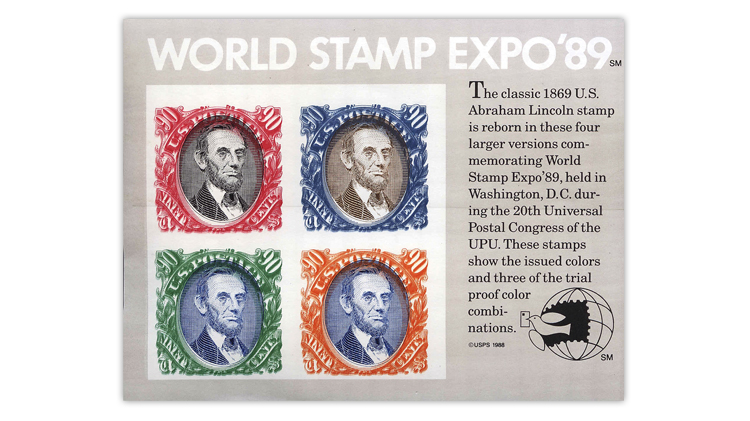 Figure 1. This World Stamp Expo ’89 souvenir sheet with all four stamp frames doubled has been certified by the Philatelic Foundation. It also is listed in the recently published 2020 edition of the Scott Specialized Catalog of United States Stamps and Co 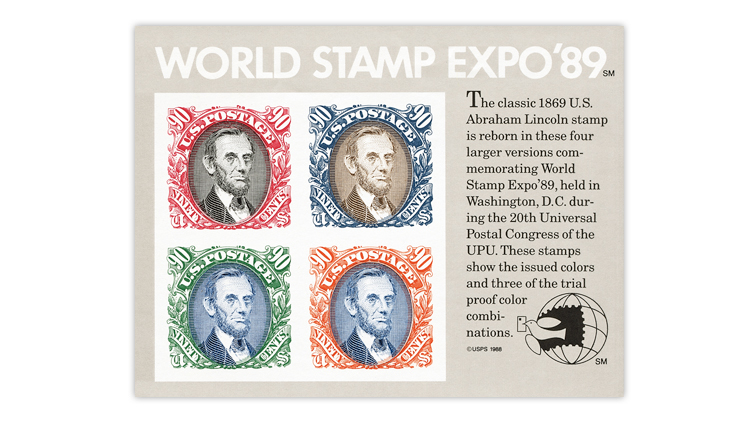 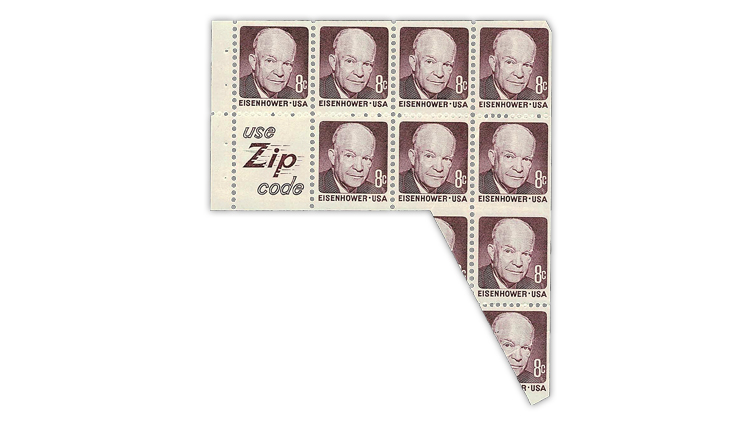 Figure 3. This 8¢ Dwight David Eisenhower booklet has a foldover that caused a nearly complete imperf-between vertical pair. However, in this case, there is too much of the bottom stamp missing to qualify. 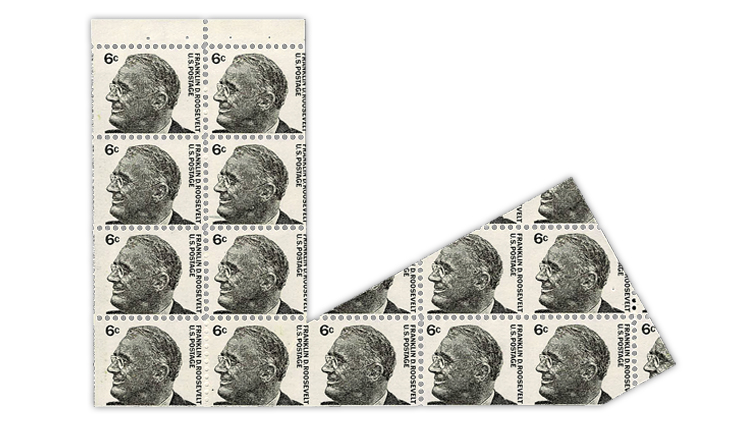 Figure 4. With parts of three panes, this 6¢ Franklin D. Roosevelt foldover features three horizontal pairs that are imperf between. Only the pair in the bottom center can be called the catalog-listed error. The other two are missing large parts of the st 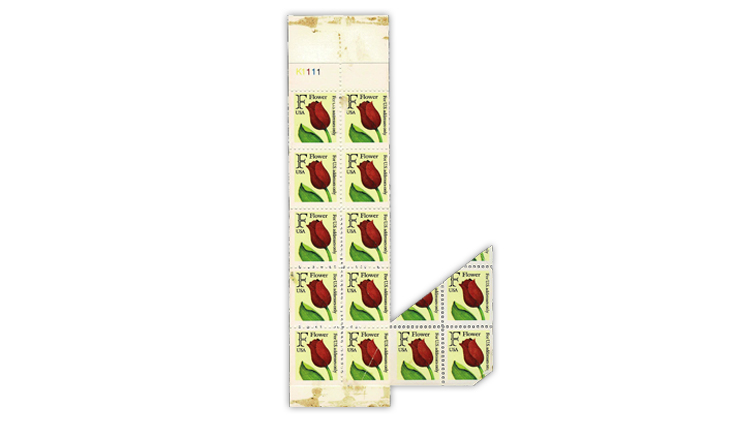 Figure 5. This F-rate Flower booklet pane suffered a foldover while still in sheet form, after perforating but before being sliced into booklet format. The bottom center pair is a Scott-listed imperf-between error.
Previous
Next

What should you do when you discover a spectacular new United States error? First, get it certified to determine if it is what it seems to be. If it passes muster, then report it to the editors of the Scott catalog and the philatelic press.

Sometimes, the process gets turned around, especially if the error is clearly what it appears to be; for example, the stamp is completely missing perforations. Then, the expertization certificate is just icing on the cake, and the finder may report it to the press first.

The patient (the item submitted for expertization) for today is the World Stamp Expo ’89 souvenir sheet with four 90¢ stamps shown in Figure 1. For comparison, a normal version of the sheet (Scott 2433) is pictured in Figure 2.

The example in Figure 1 has a doubling of all four different color frames (red, blue, green and orange). This patient needed a certificate, and the finder, John Mitchell of Indiana, has one, dated Nov. 27, 2018, from the Philatelic Foundation.

The opinion reads, “Unused, OG [Original Gum], Double impression of all four frames,” and declares the souvenir sheet to be genuine.

Mitchell reported that he purchased this souvenir sheet “on Ebay about a year ago after watching it for a long period of time.”

He said: “It was listed as a double impression of frames, with a buy-it-now price of $75, ‘or make offer,’ I was not sure if it was a ghost print, and if so, thought the price rather high. Finally, after closely studying the images online, I decided to make an offer. I offered $55, and the seller agreed.”

It mystifies me how dozens, if not hundreds, of collectors could have looked at this souvenir sheet during what Mitchell described as a “long period of time” and passed it by.

After receiving the souvenir sheet from the seller, Mitchell sent it in to be expertized, receiving the certificate eight months later. Then he notified the Scott editors.

Scott editor emeritus James E. Kloetzel confirms that it is listed in the recently published 2020 edition of the Scott Specialized Catalogue of United States Stamps and Covers. The listing (Scott 2433f) reads, “Double impression of all 4 frames.” Because no examples have been sold, the error is valued with a dash.

So far as I am aware, this is the only example reported, though it is not the only one produced. I know this because the souvenir sheets were printed from offset printing plates of 16 subjects. What has happened to the other 15 examples? Do they reside undiscovered in stamp collections?

Neither Scott nor the Foundation has been made aware of another example.

The Foundation certificate does not answer the question of how this could have happened. And that is a key question because it bears on whether this is a double-print error — the only type of offset doubling that Scott would list — or a less significant printing variety.

The printing job for the World Stamp Expo ’89 souvenir sheets was complicated. In addition to the aforementioned frame colors, there also is gray and black offset. Plus the Lincoln portraits in brown, blue and black intaglio colors were applied by 32-subject plates.

Given that it took eight months for the Foundation to deliver its opinion, there must have been considerable debate. But the opinion confirms this is a true double print, not a tagging ghost. It cannot have been a kiss print, which is sort of a chatter where a single plate hits the paper twice. That would affect only one color, and the offset colors were printed in sequence.

Could this have been part of a makeready process where the press was being tested before the production run? And if so, how did it escape the Bureau of Engraving and Printing? All such testing material was assiduously gathered up and destroyed.

It would be nice to know what the Foundation’s reasoning was for the basis of its opinion, but that is a bridge too far. The explanation would not fit on the certificate from the expert committee, and it would significantly increase the cost of providing the service if the “how” were provided along with the opinion.

While we wait for someone to figure out what happened, we have something new to look for — in our own collections and in dealer stocks. If you discover one, please let Linn’s know!

In the continuing series of material offered for sale that needs to be carefully examined, I am showing in Figures 3, 4 and 5 examples of booklet pane foldovers that have pairs of stamps that are imperf between. The question is: Do any of them qualify as a catalog-listed imperf-between error?

In all three instances, the fold happened after perforating but before the sheets were sliced into booklet panes.

Keep in mind that to qualify as an imperf-between pair for purposes of a catalog listing, the pair of stamps must be complete.

The example shown in Figure 3 is a booklet pane foldover of the 8¢ Dwight Dave Eisenhower stamp (Scott 1395d, the dull gum version). The imperf-between pair is in the column on the far right, made up of two stamps (the second and third stamps from the top) from what would be adjoining panes.

This example would not qualify for a catalog listing because a few millimeters of the lower left corner of the bottom stamp of the pair has been cut off.

There is an imperf-between vertical pair listed in the Scott U.S. Specialized at $750 (Scott 1395e), but this is not it. The value is in italics, indicating an item that is difficult to value accurately.

As was the case with the imperf-between pair in the 8¢ Eisenhower pane in Figure 3, the two horizontal pairs at right in Figure 4 are disqualified as being the catalog-listed error because they are incomplete.

However the pair in the bottom center is arguably the real McCoy despite missing a whisker of the upper left corner. I would accept it as such, as would two other authorities I normally consult on these matters. We acknowledge that other examiners might not agree.

The final candidate, shown in Figure 5, is the 1991 nondenominated F-rate Flower booklet pane (Scott 2520a). There is no doubt that the bottom center pair is complete and merits a catalog listing. There may be others, but this is clearly Scott 2520c, a horizontal pair imperf between, valued at $450 in italics.

It must be acknowledged that there are purists who will not collect a pair imperf between unless both stamps are pristine, with no evidence of the fold that caused the error on either stamp. But that is not the catalog standard.

The point to be made here is that any such pair with a substantial chunk missing does not qualify for catalog listing, and should not be offered or purchased as the catalog-listed error.

I have seen listings that include the words “almost” or “nearly” with the catalog number of the imperf-between error. While not inaccurate, it is meaningless. It is either the catalog-listed error, or it isn’t. If it isn’t, it is worth substantially less than the catalog value assigned to the error.