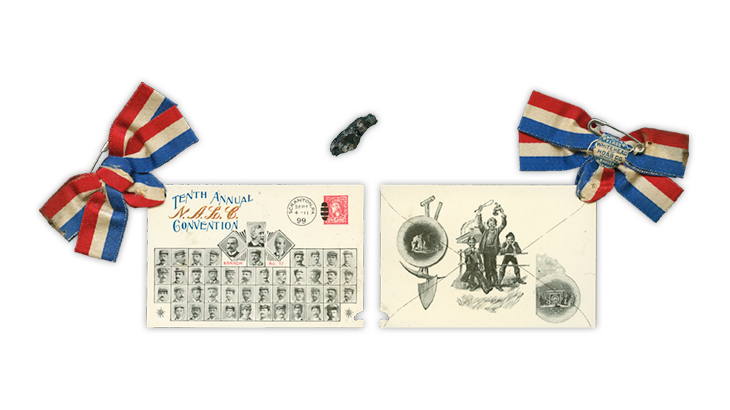 This souvenir of the 10th annual meeting of the National Association of Letter Carriers in 1899 is designed to resemble an envelope sent through the mail. Shown on the front is a small representation of the then-current 2¢ United States stamp and pictures

A nice example is shown here. This souvenir of the 1899 10th annual meeting of the 277,000-strong National Association of Letter Carriers includes a small replica of the then-current 2¢ U.S. general issue definitive, the 2¢ carmine George Washington stamp.

The souvenir was designed to look like an envelope, complete with a faux “Sept. 4-11, 99, Scranton, Pa.” cancellation on the stamplike image. Scranton was the site of the convention.

The National Association of Letter Carriers was founded in 1889, and today it has 2,500 local branches representing letter carriers in all 50 states, the District of Columbia, Puerto Rico, the Virgin Islands and Guam.

The souvenir is made of white plastic and originally had two attachments. At upper left is a red, white and blue ribbon. A small piece of coal attached to the lower right corner, emblematic of the fact that Scranton was a center for the northern Pennsylvania coalfields, has since separated from the souvenir.

Apparently the souvenir was made by the officers and members of the National Association of Letter Carriers Branch 17, which hosted the convention. They are pictured on the front of the souvenir.

It could be argued that the stamp image was problematic as it was improper, if not illegal, at the time to picture U.S. stamps — even in black-and-white. The fear was that a picture might be used in place of a genuine stamp to defraud the government.

Could the Post Office Department have taken action against the union? Probably, but it would have been unwise for at least three reasons.

In 1899 postal worker unions were not yet the behemoths with the influence they now have. But even back then, the POD must have had some hesitation in taking on a union over so minuscule an issue, especially when the union had taken pains to use an image that could not credibly pass as a genuine postage stamp.

Souvenir place card for a postmaster’s retirement in 1914