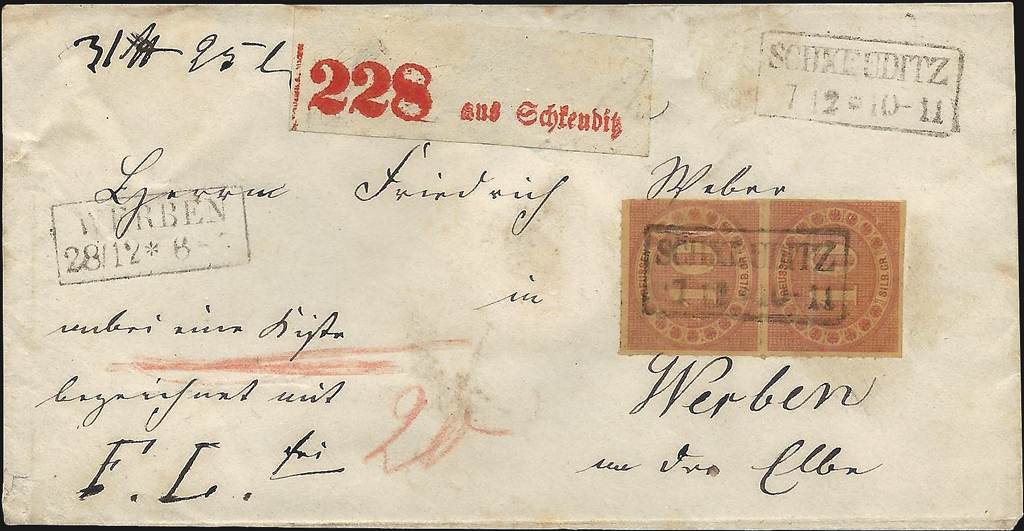 This cover from Prussia mailed in Schkeuditz to Werben is franked with a vertical pair of the 10-silbergroschen stamp (Scott 21) using Lowenberg’s patented design. 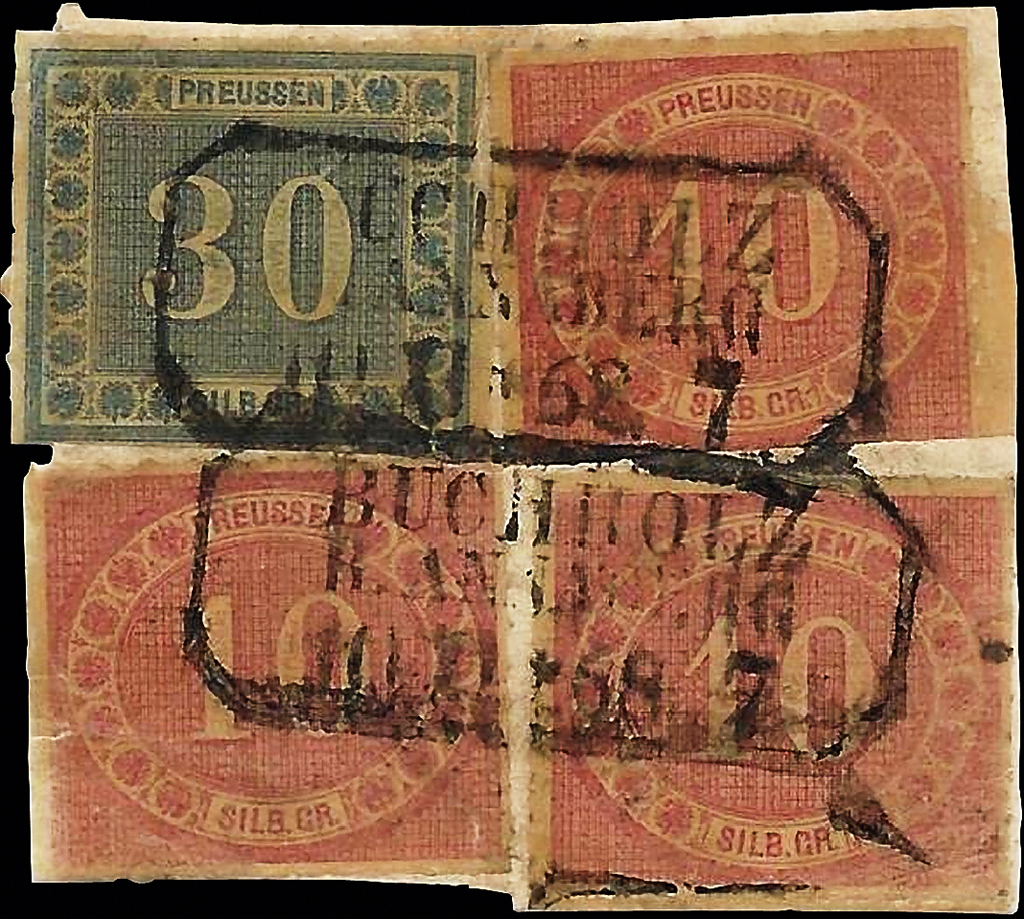 An unlisted se-tenant printing on onion skin of Lowenberg’s first U.S. 3¢ design (at right) with a pair of the Napoleon III issue of France. The French post office rejected the essay. 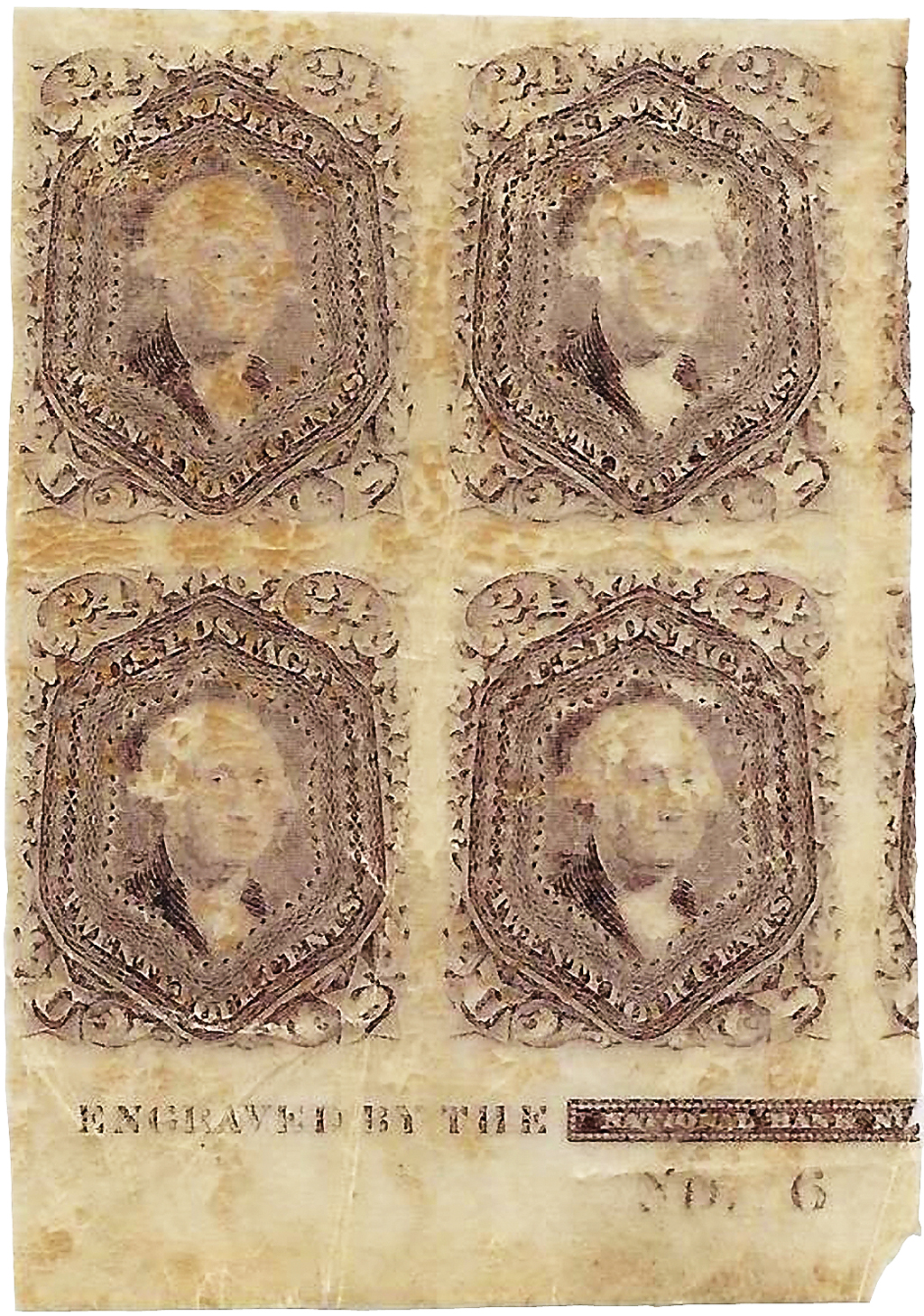 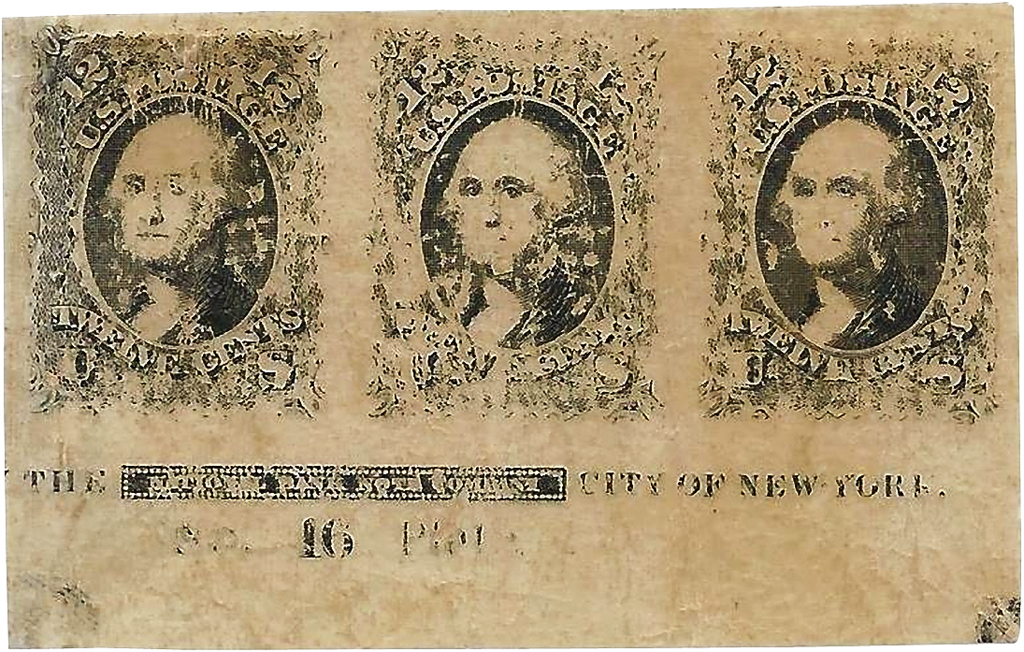 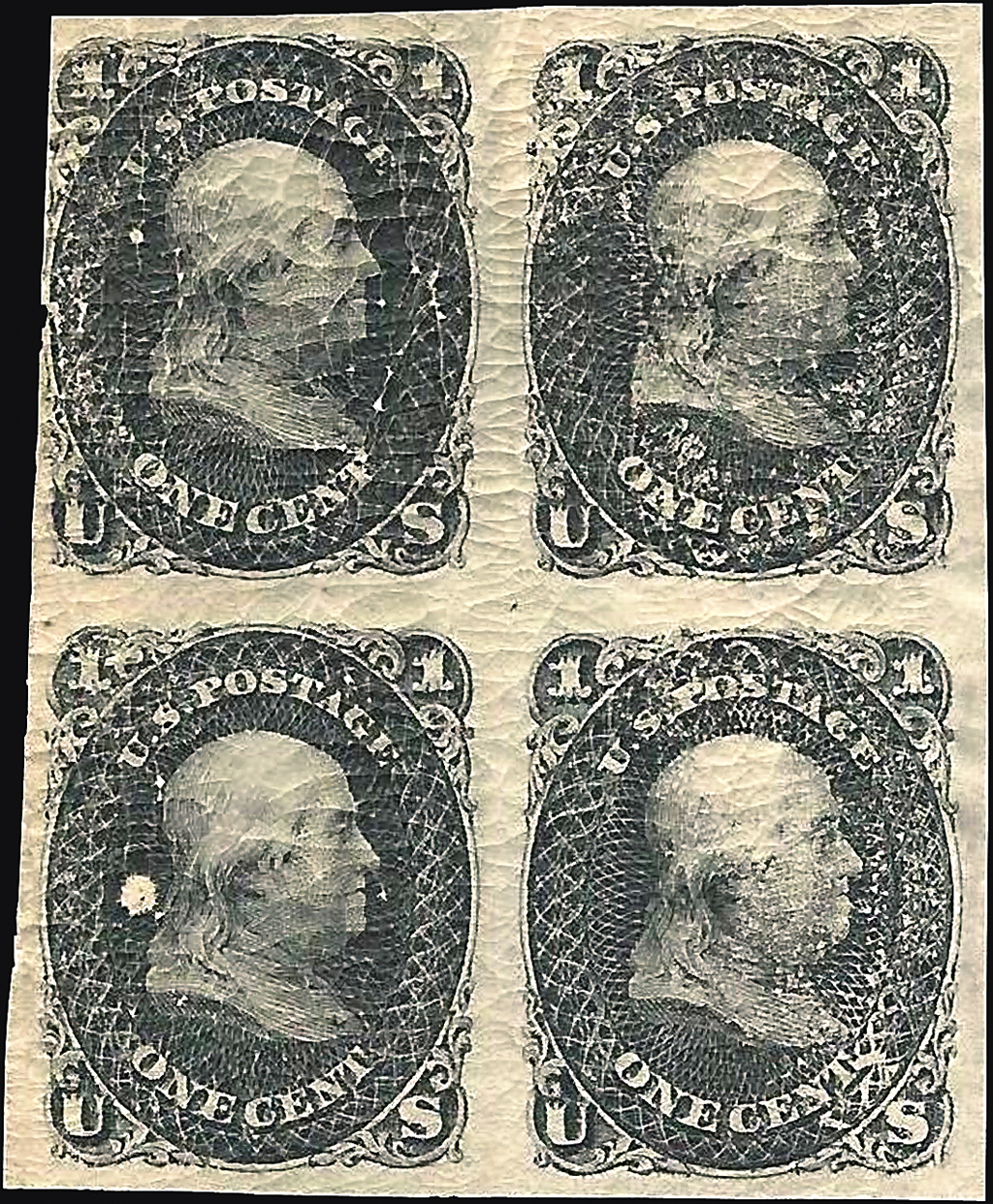 An essay of Lowenberg’s starch patent in black for the 1861 1¢ Franklin, produced by National Bank Note Co. 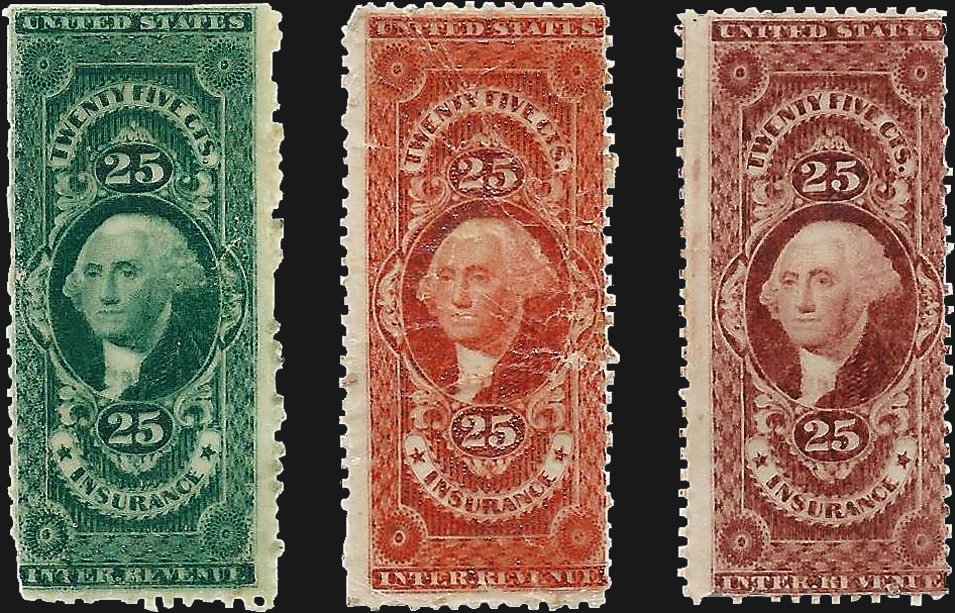 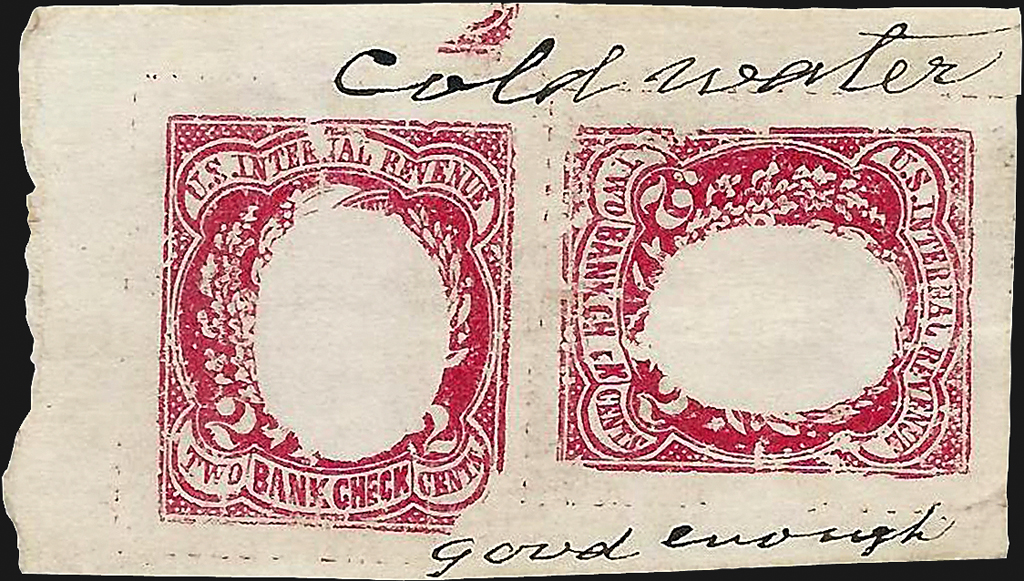 The results of Henry Lowenberg’s cold-water test, which successfully destroyed the design image when water was applied to the stamp an attempt to remove it (Turner Essay 42-A).

My last Essays and Proofs column (Linn’s, Jan. 26, page 22), introduced Henry Lowenberg and his experiments with postage stamps in the 1860s.

There is much more to the story of the man, his patents, and finally getting one of his ideas turned into actual postage stamps that saw postal use.

In the early part of the 19th century, young Henry Lowenberg and his family left Charlottenburg, Prussia, and immigrated to the United States, settling in New York City.

As a young adult he went to work in the garment district and spent his nights turning his dreams and ideas into patents.

A prodigious inventor, he received patents for dyes and starches used in the production of cloth, fire ladder designs, travel trunks, and finally, printing methods for the prevention of the reuse of postage stamps.

His first patent, No. 40,489, granted Nov. 3, 1863, involved a decal transfer (as described in my previous column). Once the decal stamp was applied to an envelope or document, it could not be removed without causing its destruction.

Lowenberg conducted a cold-water test that proved that the application of water to the center of his revenue stamp design would destroy the image when one tried to remove it.

The essay pictured here is identified as No. 42-A in Essays and Proofs of United States Internal Revenue Stamps by George T. Turner.

The second patent, No. 42,207, granted April 3, 1864, was for starch-coated paper upon which stamps could be printed. It was the result of Lowenberg’s work with dyes and starches in the garment industry. Any attempt to soak the stamp off an envelope would result in the design simply dissolving away.

National Bank Note Co. experimented with this idea by producing essay sheets of the 1861 1¢ stamp in many colors. An example of this patent printed in black is pictured here as a block of four (Scott 63TC5).

Unfortunately, the firm was unable to print a sharp high quality image on this type of paper, and this patent, therefore, was never put into production.

One might assume that by this time National had a financial stake in Lowenberg’s patents.

This third attempt was a refinement of his first patent.

Once again, his idea was never put into production.

It must have been an exciting time for Henry, toiling in the garment district by day and flirting with the American dream at night — but the brass ring of success just kept slipping through his fingers.

Not deterred by failure, he set his sights on a new market. He first pitched his decalcomania process to the French post office.

Shown here is a se-tenant piece featuring his first U.S. design in concert with the French Napoleon III issue. The French rejected his idea, but his life was about to come about full circle.

Henry Lowenberg turned and focused his sights on mother Prussia, the kingdom in which he had been born. One can only imagine the exuberance he must have felt when the Prussian government produced two different denominations, the 10 silbergroschen and 30sg, using his first patent which featured the decal on onion skin paper.

The stamps of Prussia are listed in the Scott Standard Postage Stamp Catalogue under German States. Shown here is an example of Lowenberg’s two stamps used on piece (Scott 21-22).

The story would not be complete without showing an actual use on cover. One of only two actual covers that I have ever been able to locate is pictured here, franked with a vertical pair of the 10sg stamp (Scott 21) struck with a Schkeuditz boxed cancel and mailed to Werben.

My next column will be the first of three installments on various types of die proofs that have reached philatelic hands from the first half of the 20th century.

First up will be the “Southgate” die proofs.

I want to thank Dr. Jeffery Westheimer for the loan of material from his collection used to illustrate this article.