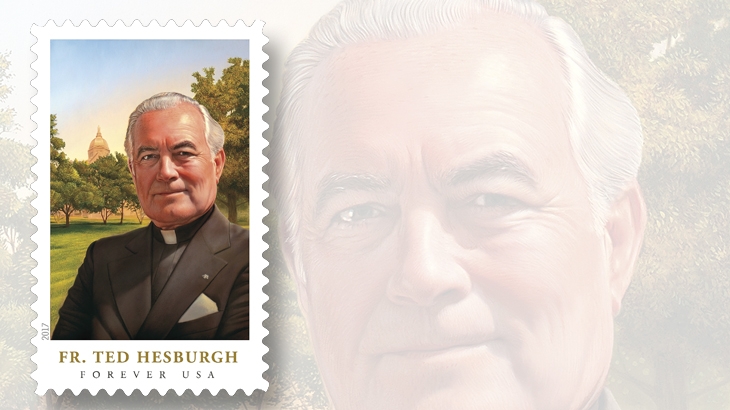 A new commemorative forever stamp honoring educator and civil rights leader Father Ted Hesburgh will be issued Sept. 1 in two formats: in a pane of 20 stamps, and in a coil roll of 50. 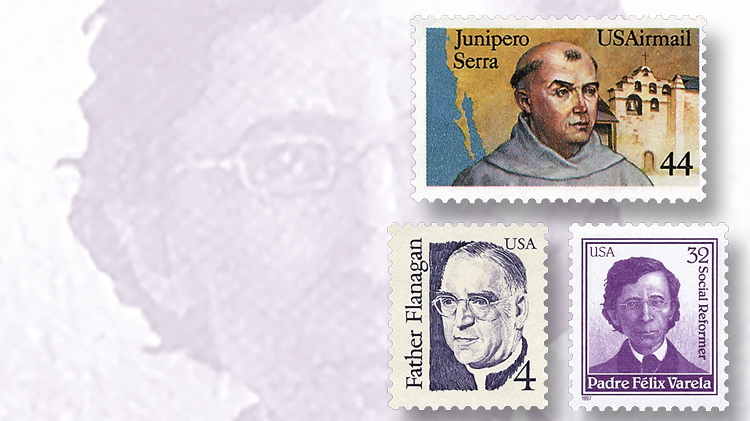 Priests from the Catholic Church who have been honored on previously issued U.S. stamps include Father Junipero Serra in 1985, Father Edward Flanagan in 1986, and Padre Felix Varela in 1997.
Previous
Next

Along with the expected pane of 20 stamps, the Postal Service has announced that the nondenominated (49¢) stamp will also be available in a self-adhesive coil of 50.

This will be the first commemorative coil stamp issued by the United States Postal Service since the 2008-12 series of 60 Flags of our Nation coil stamps.

“This subject lent itself well to this type of test,” Saunders said, “as we know we have a lot of purchase interest from the academia and religious communities.”

Preliminary artwork from the Postal Service shows the coil version looking very much like the stamp from the pane, but with straight vertical edges, rather than vertical edges with wavy line die cuts

According to technical details released by the Postal Service, only 2 million coil stamps (40,000 50-stamp rolls) are being produced for this test.

The stamp is also being issued in panes of 20, with 15 million stamps offered in pane format.

An undisclosed number of press sheets consisting of six unsevered panes (120 stamps) will be sold at face value, $58.80.

The stamp subject, the Reverend Father Theodore Martin Hesburgh, C.S.C. (1917-2015) is considered one of the most important educational, religious and civic leaders of the 20th century, according to the Postal Service.

The first-day ceremony is scheduled for Friday at 1 p.m., at the Purcell Pavilion at the Joyce Center on the campus of University of Notre Dame.

Hesburgh was born May 25, 1917, four days before President John F. Kennedy. In 1961, Hesburgh bestowed upon the president the university’s Laetare medal, an annual award recognizing a Catholic “whose genius has ennobled the arts and sciences, illustrated the ideals of the Church and enriched the heritage of humanity.”

The new stamp is being issued to mark the centenary of Hesburgh’s birth.

Born into a religious family in Syracuse, N.Y., Hesburgh decided at age 6 that he wanted to be a priest. He studied at Notre Dame and at the Greogrian University in Rome, and was ordained in 1943.

He earned a doctorate degree at Catholic University of America in Washington, D.C., in 1945, the same year that he joined the Notre Dame faculty, teaching in the Religion Department.

He became president of the university in 1952, at age 35. Five years later, President Dwight D. Eisenhower named him as a charter member of the Commission on Civil Rights.

Hesburgh came to be known as a civil rights champion who joined with Martin Luther King Jr. in a 1964 rally in Chicago.

“That same year Father Hesburgh was awarded the Medal of Freedom, the nation’s highest civilian honor, for his visionary work against elements of apartheid in America,” according to the university.

“From the exhausting fact-finding missions to the final deliberations over wording, Father Hesburgh was acknowledged as the principal architect of the Civil Rights Act and served on the Civil Rights Commission from its inception in 1957 until 1972, when President Nixon replaced him after he criticized that administration’s civil rights record.”

Hesburgh would also advise later presidents on peaceful uses of atomic energy, and the issues of campus unrest and immigration reform, all while leading Notre Dame through decades of successful growth.

In 2000, Hesburgh was awarded the Congressional gold medal by President Bill Clinton. The medal was given “in recognition of his outstanding and enduring contributions to civil rights, higher education, the Catholic Church, the Nation, and the global community.”

“Digger” Phelps was a key figure in bringing about the stamp honoring Hesburgh. Phelps is the author, along with Tim Bourret, of Father Ted Hesburgh — He Coached Me, a tribute to Hesburgh published earlier this year by Triumph Books.

In the book, Phelps wrote that he requested a stamp for Hesburgh while the priest was still alive, “but the Board of Governors was not willing to change their policy” (that only deceased individuals are to be honored on U.S. stamps).

“To honor Father Hesburgh with a Forever Stamp, has been very rewarding for me personally,” Phelps wrote. “The impact he has had on my life has been significant during my career at Notre Dame as a coach and after Notre Dame, coaching the streets.”

The new stamp is being issued two and a half years after Hesburgh’s death. In the past, CSAC stamp subject selection criteria has required that an individual be deceased 10 years, and more recently five years, before a stamp would be issued in his or her honor.

That criteria disappeared entirely in recent years, but an updating of the rules in 2016 includes this statement: “Beginning in 2018, proposals for a deceased individual will be considered three years following his/her death.”

The current CSAC criteria also states: “Stamps or stationery items will not be issued to honor religious institutions or individuals whose principal achievements are associated with religious undertakings or beliefs.”

In publicity material announcing the new stamp, the Postal Service characterized Hesburgh as “a champion of causes ranging from education to immigration reform to the plight of underdeveloped nations.”

Father John P. Washington was one of four Army chaplains commemorated on a 3¢ stamp issued May 28, 1948, to mark their heroism and sacrifice during the 1943 sinking of the SS Dorchester (Scott 956).

The Hesburgh stamp vignette is an oil-on-panel portrait of Hesburgh standing outdoors on the Notre Dame campus. The painting is by Tim O’Brien, modeled after a photograph from May 1980 taken by Bruce Harlan.

The Notre Dame Main Building dome is visible in the background of both the painting and the original photograph on which it is based.

The Main Building was previously the subject of a 19¢ postal card issued by the Postal Service on Oct. 15, 1991, to mark the university’s sesquicentennial (Scott UX157).

USPS art director Ethel Kessler designed the stamp. The inscription “Fr. Ted Hesburgh” appears below the portrait, and “Father Theodore Hesburgh” is printed in the upper selvage of the stamp pane.

Technical details and first-day cancel ordering information for the Father Ted Hesburgh stamps can be found below.

Standard ordering instructions apply. Collectors requesting first-day cancels are encouraged to purchase their own stamps and affix them to envelopes. The first-day cover envelopes should be addressed for return (a removable label may be used), and mailed in a larger envelope addressed to FDOI – Father Theodore Hesburgh Stamp, USPS Stamp Fulfillment Services, 8300 NE Underground Drive, Suite 300, Kansas City, MO 64144-9900. Requests for first-day cancels must be postmarked by Nov. 1.

The Postal Service’s uncacheted first-day cover for the Father Ted Hesburgh pane stamp is item 474716 at 93¢, and the FDC for the coil stamp is item 799416 at 93¢. USPS order numbers for stamps and FDCs also appear in Linn’s 2017 U.S. Stamp Program.