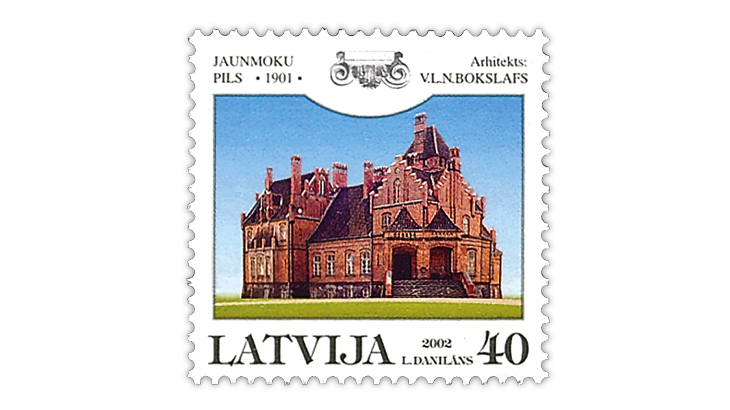 In Stamps of Eastern Europe in the Nov. 23 issue of Linn’s Stamp News, Rick Miller takes readers on a guided tour of stamps that picture castles in Latvia.

The Nov. 23 issue of Linn’s Stamp News just landed on the presses and goes in the mail to subscribers Monday, Nov. 9. And if you subscribe to Linn’s digital edition, you’re at the head of the line with early access Saturday, Nov. 7. While you wait for your issue to arrive in your mailbox, enjoy these three brief reviews of exclusive content available only to subscribers.

A guided tour of Latvian castles on stamps

Rick Miller opens his Stamps of Eastern Europe column with a question: Why did Latvia, a country of about 25,000 square miles need so many castles? Miller notes that there are at least 36 Latvian castles. As Miller explains, “Latvia has been a battleground since the 12th century. The castles are physical reminders of the wars fought between the Latvians and invaders, as well as wars fought in Latvia between the superpowers of the time: the Teutonic Knights, Prussia, Sweden, Russia and Poland-Lithuania.” Miller then provides a brief primer on the origins of Latvian place names, which comes in handy when reading some of the inscriptions on the stamps. Miller wraps things up with a look at Cesis Castle. This fortress, which Miller says “is perhaps the best example of a medieval Latvian castle,” is shown on both a 1901 Russia – Wenden local stamp and 2006 Latvian 45-santim stamp. You’ll need to read to the end to discover why.

Treasures from the Finkelburg essay and proof collections, part 4

In the final installment in his four-part series about Falk Finkelburg’s collections of United States essays and proofs, Essays and Proofs columnist James E. Lee focuses on Finkelburg’s scholarly contributions to this important field of philately. Lee singles out what he calls “Finkelburg’s greatest contribution to the study of essays and proofs”: his 23-part series of updates and corrections to the 1941 edition of Clarence Brazer’s Essays for U.S. Adhesive Postage Stamps that was published in the Essay-Proof Journal during 1975 to 1981. Finkelburg will also be remembered for his efforts to preserve the work of Brazer and Edward H. Mason, author of Essays for United States Postage Stamps, published in 1911. Much of the background presented in the column is the result of Lee’s 1999 acquisition of most of Finkelburg’s extensive files and records. Lee will eventually donate all of this material to the American Philatelic Research Library, so that future philatelic scholars will have ready access to it.

In each weekly issue of Linn’s, either E. Rawolik VI or E. Rawolik VII dissects the contents of a stamp mixture offered to collectors. E. Rawolik is a pseudonym that is also the word “kiloware” (a stamp mixture) spelled backward. This week, E. Rawolik VI explores a mixture of 53 worldwide stamps from a dealer in Ohio. The stamps were issued from 1858 to 2011, with the earliest stamp coming from Belgium and the most recent from Norway. Rawolik was pleased to find a 1993 $10 stamp from the Solomon Islands picturing a mangrove fiddler crab. The stamp is the high denomination of the Solomon Islands’ 1993 regular issue showing crabs. Another positive was the total catalog value of all 53 stamps, which came in at $116.35. Enjoy the rest of the review of this assortment, which Rawolik calls “another winner.”