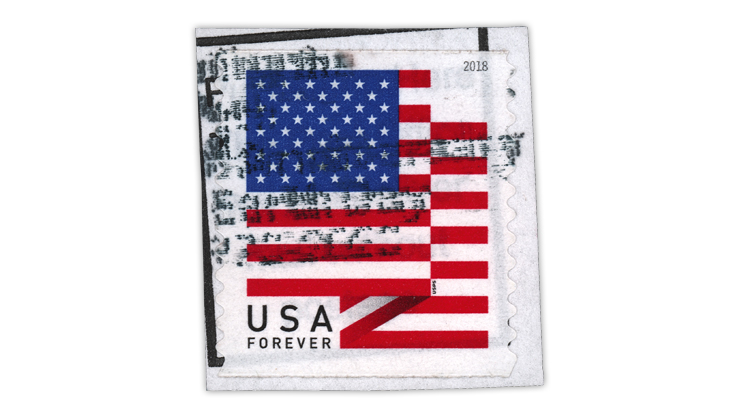 In late December 2020, the Philatelic Foundation issued a certificate stating that this United States 2018 Flag coil stamp, shown used on piece, is a tagging-omitted error. The new error was discovered in a charity mixture in August 2020 by a dealer in Fl

The new error, which occurs on the Flag coil printed by Banknote Corporation of America (Scott 5261), was reported to Linn’s Stamp News by Robert Thompson, an expert on U.S. plate number coil stamps and modern U.S. counterfeit stamps.

In a March 4 email to Linn’s, Thompson explained that the error stamp was found in a mixture. As illustrated here, the stamp is used on piece. An indistinct sprayed-on cancellation ties the stamp at left top and right to the closely cut piece of envelope paper.

Thompson said Bob Murrin of Florida discovered the error Aug. 15, 2020. In a March 5 email, Murrin told Linn’s that he found the error while searching through a mixture from a charity in Florida.

Murrin said he was no stranger to sorting mixtures, having worked his way “through approximately 14,000 pounds of regular stamp mixtures” during the past two decades. About 1,700 pounds are still waiting to be examined, he said.

“Yes, I found that untagged stamp and put the [discovery] date on the back,” Murrin said. “In most cases these untagged items turn out to be counterfeit stamps, in a few cases genuine untagged errors.”

Murrin wasn’t certain he had found a counterfeit or a heretofore undiscovered tagging-omitted error. So he decided to send the stamp to Thompson for a second opinion.

Thompson told Linn’s that Murrin mailed the suspect stamp “along with a bunch of other untagged stamps on piece for me to check to see if they are counterfeit.”

“I checked it against my other fakes and a genuine example and determined it was an untagged error,” Thompson said.

Among other things, he compared features of the stamp to the characteristics of the five known counterfeits of Scott 5261 listed in the Postal Counterfeits section of the Scott Specialized Catalogue of United States Stamps and Covers, all of which are untagged.

Thompson’s evaluation required close scrutiny under high magnification of certain details such as the “USPS” microprinting and the shading dots below the top fold of the U.S. flag.

Confident of his findings, Thompson then sent the stamp Aug. 29, 2020, to the Philatelic Foundation in New York City for an expertizing certificate.

The expert committee of the Philatelic Foundation issued its opinion on certificate No. 571447 dated Dec. 31, 2020, stating that the stamp is “used, tagging omitted, affixed to small piece, machine cancel.” The certificate also states that the stamp “is genuinely used on piece.”

Thompson said he received the certificate from the Philatelic Foundation in February.

Jay Bigalke, editor-in-chief of the Scott catalogs, confirmed that the new tagging-omitted error will be listed in the 2022 edition of the Scott U.S. Specialized catalog, which is scheduled for publication in October.