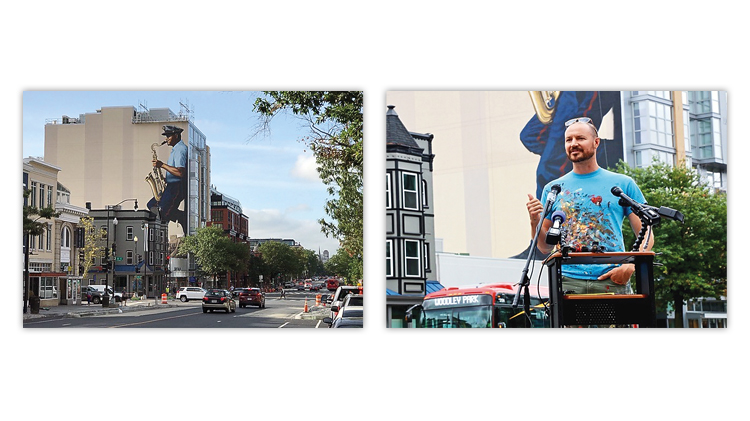 Letter carrier Roger “Buck” Hill was honored by the city of Washington, D.C., with a mural created by artist Joe Pagac of Arizona (shown at right). Photographs courtesy of the Department of Public Works, Washington, D.C.

Roger “Buck” Hill, who walked the streets of Washington, D.C., as a letter carrier for 40 years, recently received one of the largest honors ever given a postal employee in the nation’s capital.

On Aug. 27, the city of Washington honored Hill, who died in 2017, with a large mural depicting his dual life as a postal worker and jazz musician.

Tucson, Ariz., artist Joe Pagac painted the nine-story mural on the side of an apartment building as part of a project to beautify neighborhoods.

The mural shows Hill leaning against a wall with his saxophone in hand and a sack of letters at his feet. It’s probably the largest mural the city has approved, according to the Department of Public Works.

A celebrated saxophonist, Hill played into his 80s with numerous jazz bands, including those of Sonny Rollins, Dizzy Gillespie and Miles Davis.

Friends said he never liked traveling, so he remained a letter carrier until he retired in 1998. By then he had earned the moniker “The Wailing Mailman.”

News accounts of his death at age 90 said Hill would show up at his northeast Washington post office at 4 a.m. with saxophone in hand to practice before he began his mail route.

He also recorded a number of jazz albums.

“Music is captivating … compelling,” Hill once told the Washington Post. “After a while, you just have to do it, and you can’t stop.”