Set of five Innovation stamps to debut during virtual show 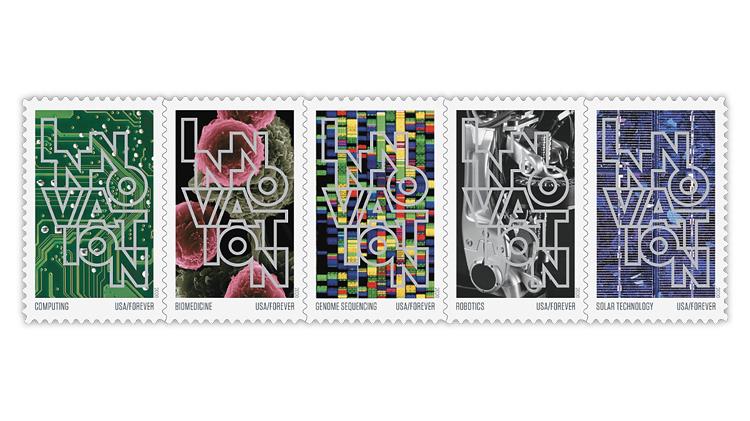 Five United States forever stamps celebrating the American spirit of innovation will be issued Aug. 20 in a pane of 20. The individual stamps pay tribute to advances in computing, biomedicine, genome sequencing, robotics and solar technology. 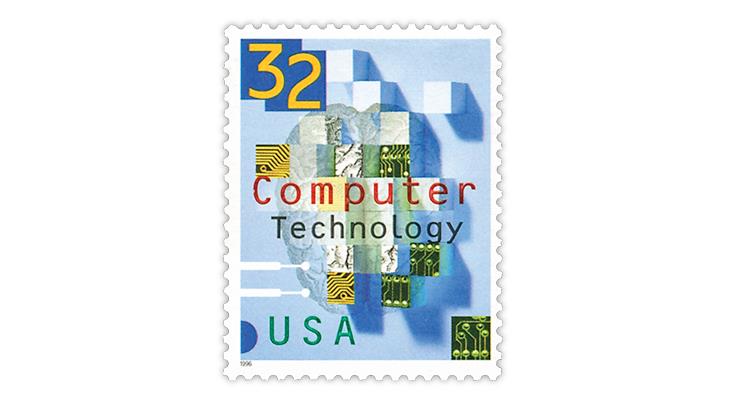 The 1996 32¢ Computer Technology stamp was an early U.S. issue recognizing scientific innovation in the computer field.
Previous
Next

The United States Postal Service will issue a set of five Innovation forever stamps Aug. 20 in association with the upcoming Virtual Stamp Show.

The nondenominated (55¢) stamps were first announced July 6 as an addition to the U.S. stamp program for 2020, and reported by Linn’s Stamp News on page 1 of the July 27 issue.

The Aug. 20 issue date is the fourth day of the six-day Virtual Stamp Show sponsored by the American Philatelic Society, the American Topical Association and the American First Day Cover Society.

“One of the show events is the Innovation stamps first-day ceremony,” according to the AFDCS, which has been named to host the event.

Details about the Virtual Stamp Show, including advance registration, can be found on the APS website. The online show is being offered as an alternative to the 2020 Great American Stamp Show, which was canceled as a result of the ongoing COVID-19 pandemic.

The pane of 20 stamps is offset-printed by Banknote Corporation of America, one of two security printing contractors currently manufacturing stamps for the Postal Service.

An uncut press sheet of eight panes (160 stamps) will be offered through Stamp Fulfillment Services, the USPS retail mail-order division, as USPS item No. 476206. Press sheets of U.S. stamps offered this year have often sold out almost immediately after the stamps go on sale.

Each stamp recognizes a different innovation and pictures a single element associated with that subject. Those subjects are computing, biomedicine, genome sequencing, robotics and solar technology.

Large interconnected letters outlined in gray and spelling out the word INNOVATION are laid over the image.

The scientific area being honored is identified in small gray letters in the lower left margin. “USA/FOREVER” is lettered in the lower right margin.

“The quest to conquer new frontiers is forged into the American spirit, but today frontiers have more to do with science and technology than geography,” the Postal Service said in announcing the new stamps. “Combine an invention with practical uses for that invention and the result is innovation.

“No one does this alone; it requires collaboration. American scientists and engineers work with and build upon the work of their counterparts around the country and the world. Some of the innovations in which Americans have played a major role include the integrated circuit, vaccine research, magnetic resonance imagery and elastography, neural implants, genome sequencing, CRISPR, robotic prosthetic limbs, and the photovoltaic cell.”

Most of the innovations being honored are receiving U.S. postage stamp recognition for the first time, although computing has been featured on several U.S. stamps, including the 32¢ Computer Technology stamp issued in 1996 (Scott 3106).

The new Computing stamp pictures a detail of a computer circuit board. According to PCMag.com, the rigid circuit board holds chips and other electronic components, and “is made of layers, from two to a dozen or more, that interconnect components via copper pathways.”

The Biomedicine stamp pictures immune system cells that work to protect the body from infection. Scientists study the natural activity of immune cells to develop strategies to fight disease.

A detail of a DNA chromatogram is pictured on the stamp titled Genome Sequencing. According to the National Human Genome Research Institute, working in association with the National Institutes of Health, the process of genome sequencing provides scientists with genetic information from DNA molecules and can highlight changes in a gene that may cause disease.

The Robotics stamp shows a photograph of a bionic ankle-foot prosthesis. Prosthetics are artificial devices used to replace body parts lost to disease or trauma.

The Solar Technology stamp pictures a detail of a square solar cell. Solar power converts energy from sunlight and has been described as the fastest- growing energy technology as efforts to improve solar cell efficiency continue.

Technical details for the Innovation stamps were not available as the Aug. 10 issue of Linn’s was going to press. That information, along with first-day cancel ordering information, will be published in a future issue.