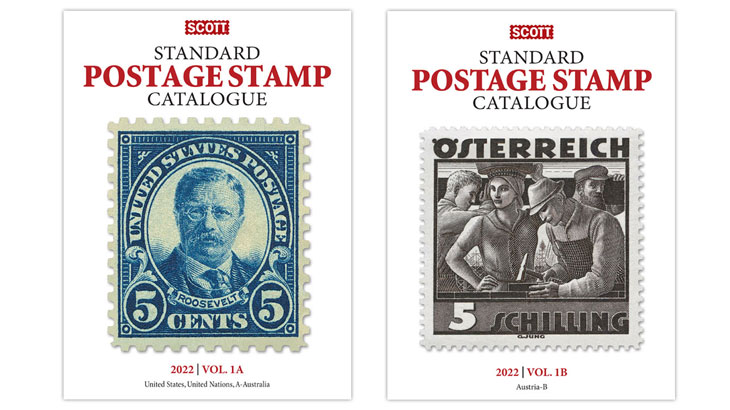 Volumes 1A (United States, United Nations, countries of the world A through Australia) and 1B (countries Austria through B) of the 2022 Scott Standard Postage Stamp Catalogue are now available for purchase.

Another catalog season is upon us as we continue the journey of the 153-year history of the Scott catalogs. The 2022 volumes are the 178th edition of the Scott Standard Postage Stamp Catalogue. Volume 1A includes listings for the United States, United Nations, and countries of the world Aden through Australia. Listings for Austria through B countries of the world can be found in Vol. 1B.

Some of these situations impacted valuing decisions this year and could lead to more changes as we continue our reviews.

For the United States, our editorial analysis corresponds closely to Scott advisors’ general feelings that current Scott values accurately reflect market values for very fine stamps. There are always exceptions, and this year’s Vol. 1A shows slight advances for the majority of the 1893 Columbian stamps (Scott 230-245) in unused original gum and mint, never-hinged conditions.

Quite a number of the 1914-17 Washington-Franklin issues make significant advances in value in unused, original gum condition and mint, never-hinged condition, especially in the No. 462-478 set. Scott 465, the 4¢ orange brown, jumps to $60 unused and $125 mint from $45 and $105, respectively, in the 2021 Scott Specialized Catalogue of United States Stamps and Covers. Similar gains are seen for almost all stamps from Nos. 468 through 476.

In the Air Post section, the 1930 Graf Zeppelins (Scott C13-C15) move ahead very slightly after a long period of dormancy.

The 2020 auction season saw the appearance of many rare and high-quality Confederate States postmasters’ provisionals. Buyer response was decidedly mixed. Some of the rarest items sold for excellent prices, such as the 3¢ Tuscumbia, Ala., handstamped envelope (Scott 6AXU1), which leaps to $30,000 from just $17,500 last year. The used Beaumont, Texas, 10¢ black on pink stamp (Scott 12X2) jumps to $30,000 from its 2021 catalog value of $20,000.

Moving in the opposite direction were items such as the Athens, Ga., 5¢ red type II stamp (Scott 5X2), which drops from $5,750 used last year to $3,000 in this Vol. 1A. Undergoing an even larger loss was the Independence, Texas, 10¢ black on buff stamp with small “10” and manuscript “Pd,” which is only known on cover. Its value plummeted to $20,000 from a lofty $32,500 last year. The unique Mt. Lebanon, La., stamp on cover (60X1) disappointingly did not sell at auction when offered in 2020. Other stamps and covers that move either up or down in value are sprinkled throughout the Postmasters’ Provisional Issues section, with declines somewhat outnumbering the gains.

In-period uses of modern U.S. postal stationery were looked at, and a number of increases in values were made.

Several new U.S. errors were discovered since the 2021 catalog season and make their first appearance in this Vol. 1A. Included are Scott 527d, the 2¢ carmine Washington type V offset issue with all color missing (from a foldover), and Scott B5b, an imperforate error of the 1998 type of the Breast Cancer Awareness semipostal that can be differentiated from imperfs from uncut press sheets by having normal roulette die cuts on the reverse of the stamps, which are omitted on the imperforate uncut press sheets. Also new is an imperforate 22¢ Official coil (Scott O136b), currently recorded only used.

Other new errors include an example of one of the 1986 Presidential Ameripex souvenir sheets with a double impression of red error (Scott 2216q) and a die-cutting-omitted block of four of the Santa Claus Christmas stamps of 2018 (5335c).

This year Argentina received a close look with almost 1,300 value changes made, most of which were increases. An inverted overprint error of the Zeppelin First Flight airmail stamp of 1930 (Scott C20a) appears for the first time in this catalog.

Austria and Austria Offices in Crete were looked at closely with approximately 2,500 and 10 value changes made, respectively. A number of recent stamp issues included as gifts with standing orders, which are noted but not listed, are valued for the first time.

Copies of the 2022 Scott Catalogue Volume 1 (Countries A-B and United States) are available AmosAdvantage.com in both print and digital formats.