The process of expertizing should be uncomfortable 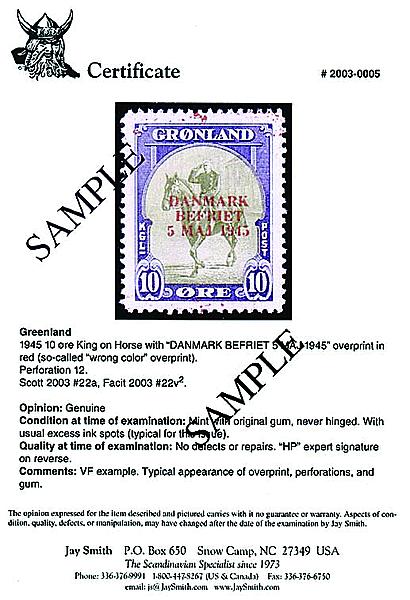 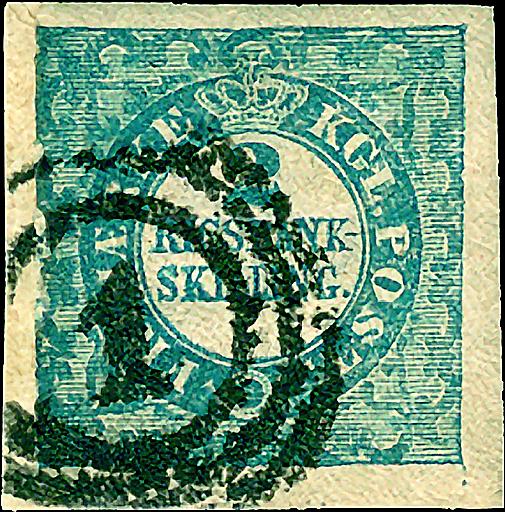 Figure 2. Denmark Scott 1a is a higher value stamp that should be examined by an expert. This stamp was repaired, with the left margin paper added, some left edges of the design painted in, and the postmark in the left margin also painted in.

John Wayne is quoted as saying, “Courage is being scared to death, but saddling up anyway.” I certainly don’t feel that I am in the category of the courageous, nor does stamp expertizing scare me to death. However, the expertizing work that I do makes me extremely uncomfortable, and it should.

Having spent the last 41 years as a Scandinavian specialist dealer (though I also sell United States stamps and worldwide areas), I feel that I owe the philatelic community what benefit there might be from knowledge I have accumulated.

Sharing that knowledge has taken the form of philatelic writing, book publishing and generally making myself available to collectors.

Some years ago, that sense of obligation led me to start doing Scandinavian expertizing work. I do this work both for a major philatelic organization, and with my own certificates under my own name. A sample is shown in Figure 1.

In contrast to today’s attitude that “everybody can be an instant expert about everything,” it took me about 25 years to feel that I was reaching the point where the knowledge I had accumulated could be useful to others.

Seeing a philatelic item once or a few times does not qualify one as knowing very much about it.

It takes a long time to learn about the patterns and attributes of both the good material and the bad, and about those who work hard at trying to fool the experts.

In John Wayne’s context, this is a constant battle, even though many of the stamp fakers are long dead.

As a dealer, I have a responsibility to my clients to make sure that the descriptions of the stamps I offer for sale are correct and complete, and that they tell the full story of the item, not just the good parts.

I take that responsibility seriously.

In fact, my invoices state, “Our exclusive money-back lifetime guarantee assures, to the purchaser, that every item is genuine and as described.” The lifetime being referred to is mine.

I do make mistakes. Any dealer who says he does not is delusional. But I want to be sure to correct my mistakes whenever possible.

However, expertizing is quite different from and has greater responsibilities than describing an item for the purpose of selling it.

The expertizer is often playing an essential role in a financial transaction between two other parties. The expertizer’s opinion can mean that one party or the other will make or lose a lot of money. Even when the situation is not that of a pending transaction, the owner of a stamp relies on the expert’s certificate when he sells his collection.

Figure 2 shows an example of a stamp that was expertized, Denmark’s 1851 2 rigsbank daler first printing (Scott 1a).

It is often said that an expert’s opinion is just that, an opinion.

Never forget that. It is an opinion, not a fact. It is the expert’s best judgement based on experience. The opinion can be wrong, and sometimes it takes decades for the error to come to light.

When I started formally doing expertizing work, I thought it was going to be enjoyable. I quickly came to realize that I was wrong — very wrong. I discovered that the process was, for me, uncomfortable. But that is as it should be. Others are relying on my opinion well beyond the few dollars they are paying for that opinion.

If I say that an item has an added corner perforation when in fact it does not, I will deprive the owner of much of the value of the item. If I opine that the postmark on an item is genuine and appropriate for the stamp issue (something that can be difficult to determine for certain issues), I may be setting up the purchaser of the item for a financial loss if it is later determined that the postmark is bad.

Either way, there are winners and losers, and my opinion, whether it be right or wrong, makes a difference.

This responsibility, and the potential consequences, keeps me focused on taking the time to come to the correct opinion, and reminds me to respect the limits of my philatelic knowledge.

The longer I do this work, the less comfortable I become. The scary part for me is that, if my mind and eyesight hold out, I should have at least another 30 years of active expertizing work ahead of me. In those years, I will continue learning and getting better, but I may also increasingly feel the weight of the responsibility entrusted to me. Hopefully, I will know when it is time to stop doing expertizing work.

Jay Smith operates Jay Smith & Associates along with his partner and wife Bonnie, and three other staff members. He has been a dealer since 1970 and has specialized in Scandinavian philately since 1973. The firm also stocks U.S. and worldwide stamps.

The author can be contacted at js@JaySmith.com, or via his website, www.JaySmith.com.