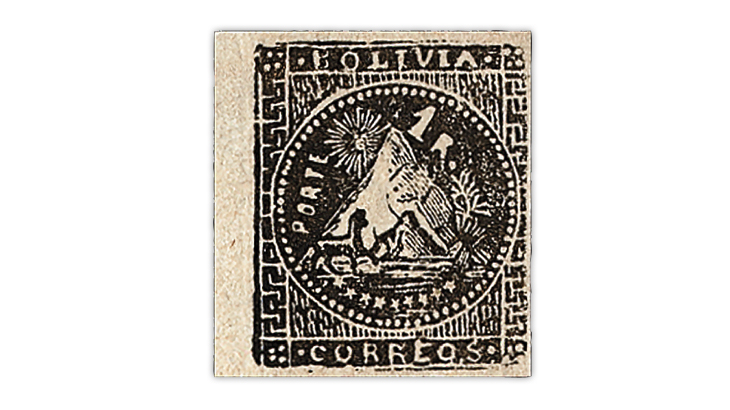 Bolivia’s first postage stamps were privately produced in 1863 under a government contract for a postal service, but the stamps were never put into use.

Bolivia, a landlocked nation, is the fifth largest country by area in South America. The former Spanish colony proclaimed its independence on Aug. 6, 1825, after nearly 16 years of fighting against colonial rule.

In the early 19th century, Bolivia was a poor country with a mostly illiterate population. However, on Feb. 21, 1863, President Jose Maria de Acha issued a decree organizing a postal service for the country. The right to operate the postal service and the printing of postage stamps was put up to the highest bidder.

A private citizen, Justiniano Garcia, won with a bid of 17,000 pesos. The contract for the postal service was signed on March 18, 1863, to go into effect on June 1 of that year.

Garcia arranged for postage stamps to be printed, but political intrigues led to the suspension of the contract on April 29, 1863, pending a ruling by the Bolivian legislature. The legislature never took up the issue, meaning that the contract was effectively canceled 42 days after it was signed and before it ever went into effect.

The stamps were never issued and used, but a few examples exist with forged or favor cancels. Covers bearing the stamps are generally considered to be spurious.

Today these stamps are known as “Challas,” which in the native Aymara language means to “inaugurate.”

The main design of these stamps shows the central elements of the Bolivian coat of arms: an alpaca standing in front of the Silver Mountain in Potosi, a rayed sun to the left of the mountain peak, a sheaf of wheat to the right, and stars symbolizing the departments of the republic on the bottom.

The denominations were printed in both black, with a coating of golden dust, and blue. In the black printing, which was first, there was a tete-beche variety (two stamps joined together with one stamp inverted in relation to the other) in position 100. This was corrected in the blue printing.

These stamps are not common, and doubtless forgeries exist. If you find genuine examples offered at the Scott catalog value, they would be a very good buy. But expertization is a must.