“Hello” in many languages on new U.N. stamps 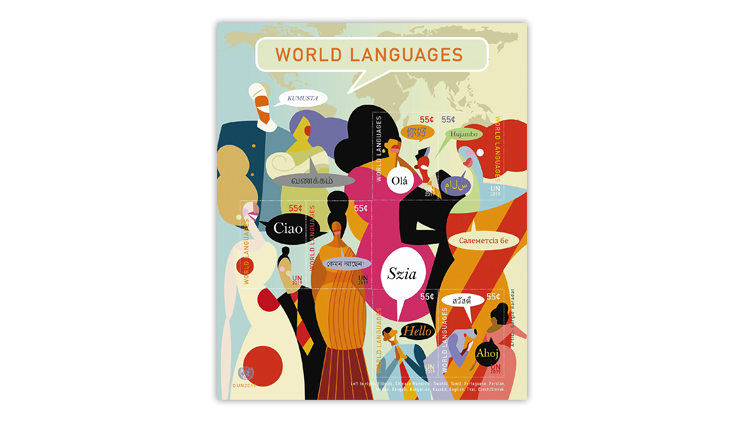 The United Nations Postal Administration will issue three panes of six stamps each on Feb. 21, International Mother Language Day. The pane of 55¢ stamps includes the word “Hello” in English and in a dozen other languages. 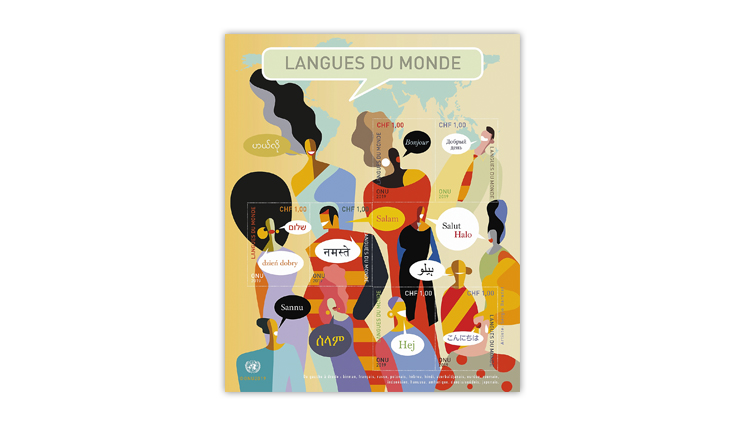 All three of the World Languages panes include an inscription in the selvage at the top and part of a world map in the background. The German-language inscription on the pane of €0.80 stamps reads, “Sprachen der Welt,” which translates to “languages of the world.” 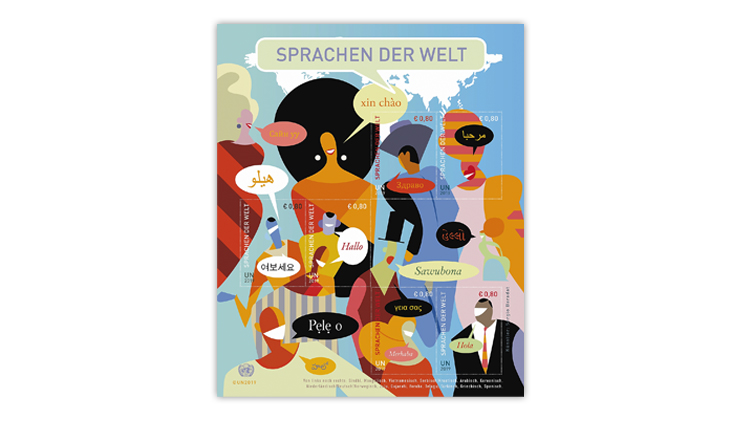 All three of the World Languages panes include an inscription in the selvage at the top and part of a world map in the background. The German-language inscription on the pane of € 0.80 stamps reads, “Sprachen der Welt,” which translates to “languages of the world.”
Previous
Next

The day is observed each year on Feb. 21 to “promote awareness of linguistic and cultural diversity and promote multilingualism,” according to the UNPA.

The UNPA will issue 18 World Languages stamps on Feb. 21 in three panes of six, one pane for each UNPA post office. The post offices are located at U.N. headquarters in New York City; the Palais des Nations in Geneva, Switzerland; and the Vienna International Center in Vienna, Austria.

Sergio Baradat of the United Nations designed the panes. His designs feature symbolic people in colorful clothes greeting each other, with their greetings inside speech balloons.

For example, on the first of the six 55¢ stamps in the UNPA/New York pane, a woman in a pink dress says “Olá,” “hello” in Portuguese. The English “Hello” is found on the stamp at left in the bottom row.

According to the UNPA, the other 11 languages represented on this pane are Filipino, Chinese Mandarin, Swahili, Tamil, Persian, Italian, Bengali, Hungarian, Kazakh, Thai and Czech/Slovak.

The pane is inscribed “World Languages” in English at the top. And, like the other two panes, it pictures part of a world map in the background.

The UNPA/Geneva pane of six 1-franc stamps includes 14 languages in 13 speech bubbles, as one bubble includes two greetings. In this bubble, located in the selvage on the right side of the pane, one person offers the Romanian “Salut,” while another replies with the Indonesian “Halo.”

The other languages on the UNPA/Geneva pane are Burmese, French, Russian, Polish, Hebrew, Hindi, Azerbaijani, Urdu, Hausa, Amharic, Danish/ Swedish and Japanese. Inscriptions on this pane are in French with “Langues du Monde” at the top.

International Mother Language Day was proclaimed by the general conference of UNESCO in 1999 at the initiative of Bangladesh. It was formally recognized by the U.N. General Assembly in 2008.

In discussing International Mother Language Day on its website (www.un.org), the United Nations said: “Languages, with their complex implications for identity, communication, social integration, education and development, are of strategic importance for people and planet. Yet, due to globalization processes, they are increasingly under threat, or disappearing altogether. When languages fade, so does the world’s rich tapestry of cultural diversity. Opportunities, traditions, memory, unique modes of thinking and expression — valuable resources for ensuring a better future — are also lost.

“At least 43% of the estimated 6000 languages spoken in the world are endangered. Only a few hundred languages have genuinely been given a place in education systems and the public domain, and less than a hundred are used in the digital world.”