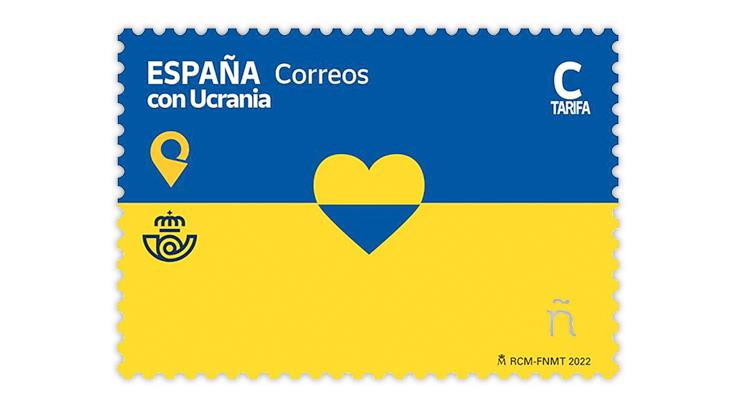 Spain’s new postage stamp showing solidarity with Ukraine includes the emblems of both the post offices of Spain (Correos) and Ukraine (Ukrposhta). 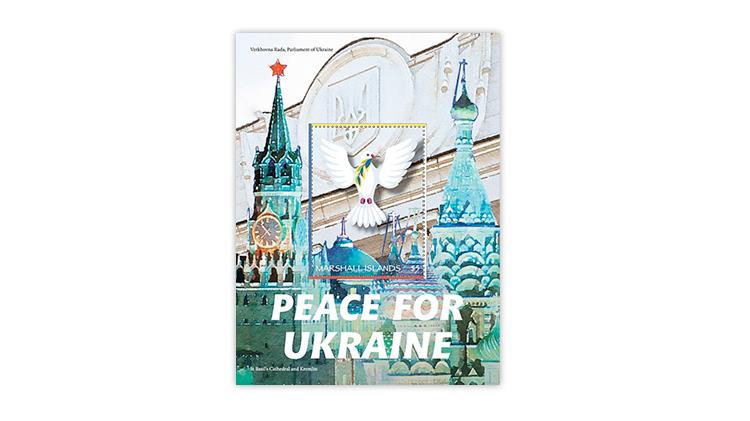 The Marshall Islands is scheduled to issue this “Peace for Ukraine” souvenir sheet in June. The new-issue agency Inter-Governmental Philatelic Corp. has announced that The Gambia, Grenada and Guyana are issuing similar souvenir sheets.
Previous
Next

Countries around the world continue to issue postage stamps to show their support for Ukraine.

The latest stamps are from Spain and four countries represented by the new-issue agency Inter-Governmental Philatelic Corp.: The Gambia, Grenada, Guyana and Marshall Islands.

Spain issued a nondenominated, self-adhesive stamp May 30 called “Spain with Ukraine.” As of June 9, the stamp was listed as sold out on the online shop of Spain’s post office, Correos.

The stamp design resembles Ukraine’s flag with blue at the top and yellow at the bottom. In the center is a heart also in Ukraine’s national colors.

The emblems of Spain’s Correos and Ukraine’s post office Ukrposhta are shown on the left side of the design, and the Spanish-language inscription in the upper left translates to “Spain with Ukraine.”

Correos reported a printing quantity of 640,000 stamps, and said that the stamps were sold in packs of five.

In a June 9 press release, IGPC announced that four souvenir sheets with the theme of “Peace for Ukraine” would be issued sometime in June.

The press release said: “Historically, postage stamps have always transcended politics and borders. Now in support of peace for Ukraine and their neighboring nations, Government Postal Authorities around the world plan to release official postage stamps.”

The designs of the four souvenir sheets are different, but all include a single stamp featuring a peace dove, with the selvage showing government buildings of Ukraine and Russia.

IGPC said, “Along with the dove, the stamps also depict the official capital buildings of both Russia and Ukraine — a very symbolic expression of compassion and unity for all world citizens.”

IGPC said that the souvenir sheets will be available for purchase at post offices in the countries of issue, from stamp dealers and on its website.

Canada Post will issue a semipostal stamp July 7 to support Ukraine (Linn’s, June 13, page 1). Latvia (Linn’s, April 11, page 17) and Austria, Croatia, Estonia, Lithuania and Poland (Linn’s, April 25, page 12) are among the other countries that have already issued stamps to demonstrate their support for Ukraine after the Feb. 24 Russian invasion.