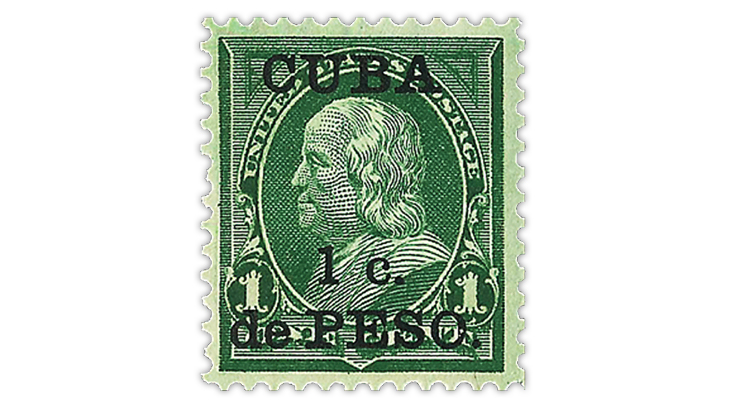 The 1899 set of eight overprinted and surcharged Cuban stamps issued under United States administration are a good buy in the $50 to $70 price range.

The Caribbean island of Cuba temporarily came under the administration of the United States as a result of the American victory in the 1898 Spanish-American War. By the peace treaty of Dec. 10, 1898, Spain relinquished its former colony to the United States in trust for its inhabitants.

The first stamps issued under U.S. administration were Cuban colonial stamps with various overprints and surcharges. In 1899, U.S. definitive stamps were overprinted “Cuba” and surcharged with values expressed in centesimos de pesos (Scott 221-226A).

The 10c-on-10¢ brown, Daniel Webster stamp type II (Scott 226A) is scarce and expensive, valued at $6,000 in unused, original gum condition in the Scott Specialized Catalogue of United States Stamps and Covers.

The set of eight stamps is a good buy in fine-very fine grade and unused, original gum condition in the $50 to $70 price range. Assembling a sound set is probably best done by picking and choosing one stamp at a time instead of buying the whole set at once.

Catalog values for the individual stamps in mint, never-hinged condition total about $200. If you are buying the stamps in that condition, buying them one at a time is definitely the way to go.