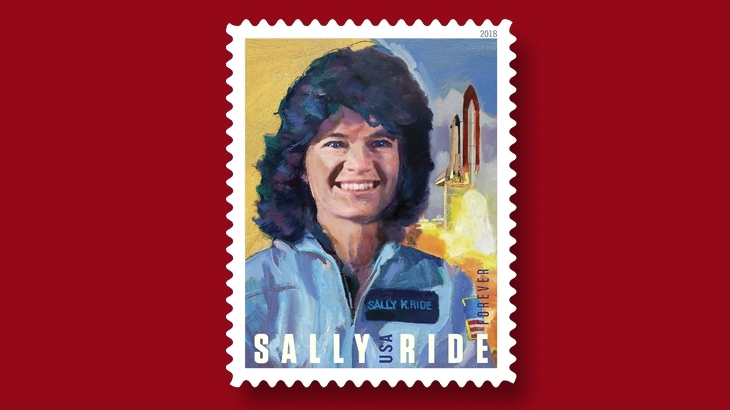 The United States Sally Ride forever stamp will be issued May 23 with a ceremony in La Jolla, Calif. A physicist and astronaut, Ride became the first American woman in space in 1983.

Sally Ride, the astronaut who became the first American woman to travel into space, is being honored on a new United States forever stamp.

The nondenominated (50¢) forever stamp will be issued in a pane of 20 on May 23 in La Jolla, Calif., a community within San Diego where Ride lived and worked before her death from pancreatic cancer in 2012.

The stamp ceremony will take place at 5 p.m. (Pacific Time) in the east ballroom of the Price Center at the University of California San Diego, 9500 Gilman Drive, in La Jolla.

The ceremony is free and open to the public, but the U.S. Postal Service has also provided an online RSVP site.

The Sally Ride stamp shows two distinct elements, with a portrait of Ride in the foreground to the left, and an image of the 1983 liftoff of the space shuttle Challenger at right.

The Sally Ride portrait is modeled after a detail of a group photograph of the Challenger crew taken in January 1983 in Johnson Space Center, Houston, Texas.

The image of the space shuttle is modeled after a 1983 photograph of the Challenger liftoff.

The stamp art was first sketched in charcoal, according to the Postal Service, and then rendered in oil paint.

Salmon has created artwork that is part of the permanent collection at Kennedy Space Center, and has exhibited three paintings in a Smithsonian exhibition titled “The Artist and the Space Shuttle.”

In her role as mission specialist, Ride was on board the second flight of the orbiter Challenger alongside crew commander Robert Crippen, pilot Frederick Hauck, and mission specialists John Fabian and Norman Thagard. It was the first shuttle mission to carry a five-person crew.

The new stamp will be the second from the U.S. Postal Service to specifically honor an American astronaut by showing a portrait and inscribed name. A forever stamp issued May 4, 2011, celebrated Alan Shepard as the first American in space (Scott 4527).

Sally Kristen Ride was born May 26, 1951, in Encino, Calif. According to Sally Ride Science, the UC San Diego educational program, Ride was completing her doctorate in physics at Stanford University in 1977 when she saw an article in the student newspaper reporting that NASA was seeking astronauts — and that for the first time, women could apply.

She was selected as an astronaut candidate and completed a one-year training and evaluation period. She worked as an on-orbit capsule communicator for two space shuttle missions before she was chosen to be a mission specialist aboard STS-7, NASA’s seventh space shuttle mission.

On June 18, 1983, Challenger launched with Ride on board for the six-day mission, permanently etching her name in the history of space travel.

Along with being the first American woman in space, Ride was, at age 32, the youngest American to travel in space, a distinction that is still true today.

In a 2008 interview reported by NASA, Ride recalled learning of her selection.

“The fact that I was going to be the first American woman to go into space carried huge expectations along with it,” Ride said. “That was made pretty clear the day that I was told I was selected to a crew.

“I was taken up to (Johnson Space Center director) Chris Kraft’s office. He wanted to have a chat with me and make sure I knew what I was getting into before I went on the crew. I was so dazzled to be on the crew and go into space I remembered very little of what he said.”

Ride would return to space for the second and final time as a mission specialist on STS-41G, which launched Oct. 5, 1984. Although she was later assigned to the crew of STS-61M, training for that mission was terminated following the 1986 space shuttle Challenger disaster that occurred during the liftoff of mission STS-51L, resulting in the deaths of the seven crew members.

Ride served on the presidential commission that investigated the Challenger accident.

After leaving NASA, Ride joined the faculty at UC San Diego as a professor of physics, and later helped establish Sally Ride Science “to inspire young people in science, technology, engineering, and math (STEM) and to promote STEM literacy.”

The education program was relaunched at UC San Diego in 2015.

Twelve years and four days after Ride’s first mission into space, the Postal Service paid specific tribute to her when it issued the $3 Challenger Space Shuttle priority mail stamp on June 22, 1995 (Scott 2544).

The headline of the June 19 USPS news release No. 95-047 announcing the new stamp reads: “New $3 priority mail stamp commemorates shuttle mission that carried first American woman into space.” Ride was named in the third paragraph of the release.

The former astronaut was welcomed to the stage of the Anaheim Convention Center in California on July 7, 2000, where stamp collectors attending World Stamp Expo 2000 heard her speak at the first-day ceremony for the $11.75 Space Achievement and Exploration stamp (Scott 3412).

After admiring the design of the unusual round stamp with its holographic image of Earth, Ride recalled her own experience of viewing the planet from orbit for the first time and of peering into the vast infinity of space.

Ride was posthumously awarded the Presidential Medal of Freedom by President Barack Obama in 2013.

“We remember Sally Ride not just as a national hero, but as a role model to generations of young women,” Obama said. “Sally inspired us to reach for the stars, and she advocated for a greater focus on the science, technology, engineering and math that would help us get there.”

Along with the pane of 20 Sally Ride stamps that will be sold in U.S. post offices, the Postal Service has created a 180-stamp press sheet consisting of nine unsevered die-cut stamp panes, which it will sell at face value for $90.

First-day covers for the Sally Ride stamp will be postmarked with pictorial cancels.

The central design of the digital color postmark reproduces the STS-7 mission insignia.

In its description of the insignia, NASA wrote: “The orbiter appears in the center, circling the Earth, with the remote manipulator arm positioned such that, the number 7 is formed, representing the seventh mission of the space shuttle program. Likewise, seven stars are visible against the black sky. Within the sun’s center are representations for the five crew members, including, for the first time in NASA’s space program, a woman … ”

On the digital color postmark, a banner spells out “Sally Ride” in lettering similar to the stylized curved text in the NASA insignia in use during the 1980s, and includes the phrase “America’s first woman in space.”