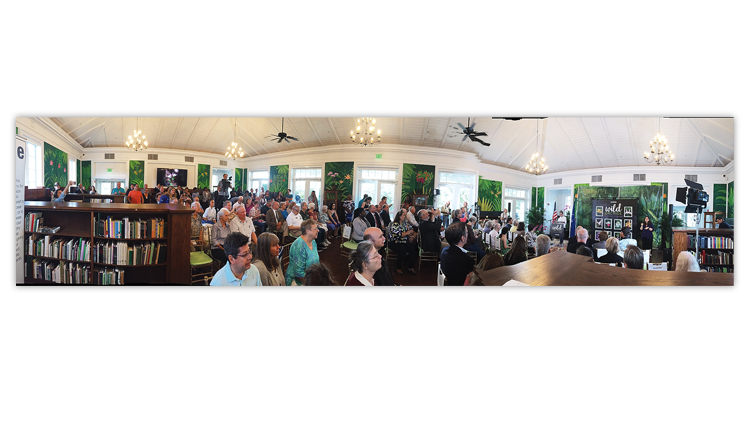 Stamp collectors, orchid fans and others filled the library at Fairchild Tropical Botanic Garden in Florida for the Feb. 21 first-day ceremony for the new Wild Orchids stamps from the United States Postal Service. They were welcomed by writer Georgia Task 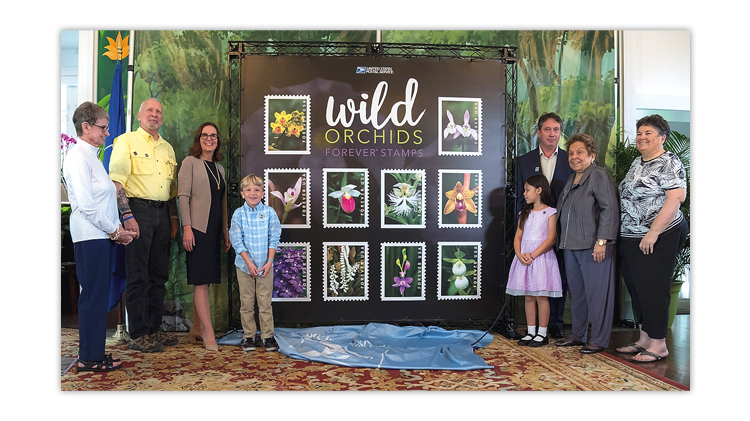 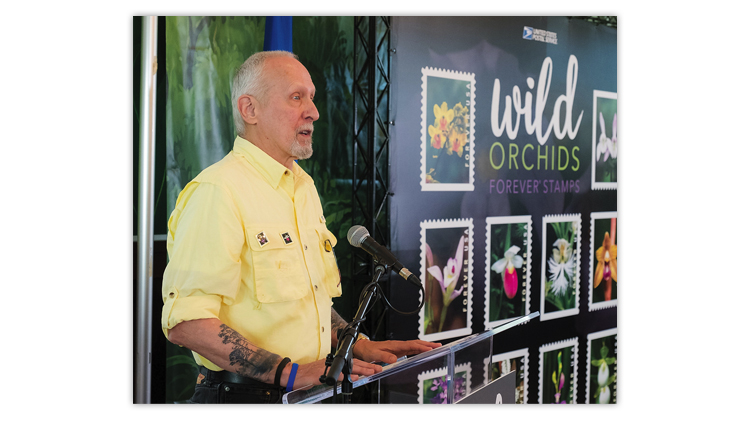 February mornings are often cold and cloudy, but the skies in south Florida were bright and the temperatures were warm on Feb. 21 when the United States Postal Service dedicated its new Wild Orchid forever stamps.

More than 100 people gathered at the American Orchid Society Library on the campus of Fairchild Tropical Botanic Garden in Cutler Ridge, Fla.

The 10 new stamps come in two formats: a double-sided pane of 20 (which the Postal Service describes as a booklet) and in rolls of coil stamps. The stamps depict nine different wild orchid species found growing throughout the United States.

Guests at the event were each provided a ceremony program and a pin showing one of the Wild Orchid stamps.

By my count there are 12 previously issued face-different U.S. stamps showing orchids, plus one depicted in the selvage of the 2006 Southern Florida Wetland pane of 10 from the Nature of America series (Scott 4099).

The master of ceremonies was Georgia Tasker, a horticultural writer for Fairchild Tropical Botanic Garden and host of the “Gardening with Georgia” blog. Tasker was the longtime Miami Herald garden writer and a Pulitzer Prize finalist.

Noah Celic and Kimberly Lampidis sang the national anthem, with the presentation of colors by the Homestead Air Force Base 482D honor guard.

Wedegaertner said she was thrilled that the society was hosting the event.

She also reminded the audience that wild orchid habitats are fragile and require care if these plants are to survive.

After the design unveiling, the stamp dedication was given by USPS Vice President Jacqueline Krage Strako.

“The Postal Service has a proud tradition of showcasing flowers and floral artwork on its stamps,” Strako said. “In fact, flowers have proven to be a perennial favorite, with a dazzling variety of stamps over the years.”

After describing some of those recent stamps, she added, “As you can see, in our own way, we are serious about flowers. And like your own favorite perennials, you can depend on the U.S. Postal Service for new blossoms to the Flower stamps every year.”

Strako pointed out that over-collection of orchids has now given rise to conservation efforts, and suggested orchid collectors could cure this “orchid delirium” with the purchase of these new stamps.

Stamp collector, author and nature photographer Jim Fowler, whose images appear on the new stamps, reported that he had a Brownie camera thrust into his hands at an early age. A friend invited him 50 years ago to see and photograph a pink lady-slipper orchid in South Carolina, and he’s been snapping orchid photographs ever since.

Fowler explained that the dustlike orchid seed needs specific symbiotic fungi to grow, specialized pollinators to reproduce, and a living host plant to grow on. If any of these are not present, terrestrial orchids will not survive.

Many of Fowler’s photographs used on the new stamps were taken on Native Orchid Conference field trips; he thanked that group and the North American Orchid Conservation Center for their conservation efforts, and he also thanked the Postal Service for its forward thinking in issuing these native orchid stamps.

The final speaker, Lawrence W. Zettler, is director of the Illinois College Orchid Recovery Program. He has been working with students and leading them in field research.

More than half of the 300 native U.S. orchid species are vulnerable to extinction, Zettler said, adding that he hopes that the new stamps will serve as a portal for orchid preservation.

After the speeches, collectors swarmed the USPS tables for signatures, stamps and postmarks.

Stamp collectors and orchid lovers everywhere are sure to enjoy these newest flowers from the U.S. Postal Service.