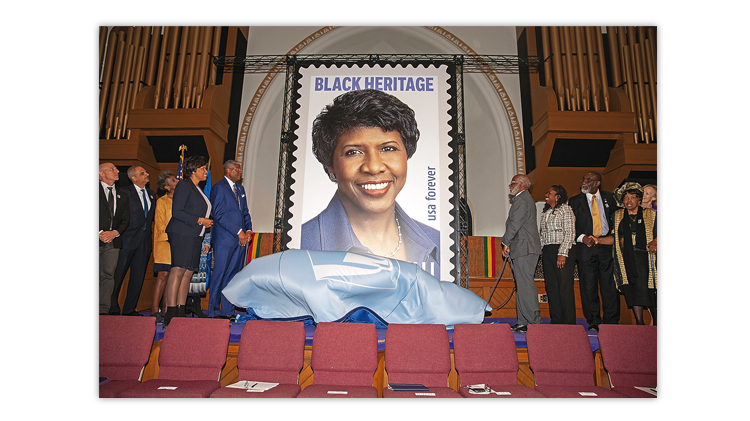 In a ceremony that filled the Metropolitan African Methodist Episcopal Church, government officials and family friends joined together, saying how Ifill’s professionalism would be the best answer to current questions about biased news reporting.

Both recalled how tough a questioner she was as a White House reporter. Clinton praised her in a video as “a great reporter and master storyteller.”

But it was a member of Ifill’s family who said the stamp, more than anything else, had helped ease their family’s grief over her death Nov. 14, 2016, at age 61.

“Nothing has done more to heal our family than those three words ‘Gwen Ifill Forever,’ ” said Ifill cousin Sherrilyn Ifill, pointing to the huge reproduction of the stamp hanging in the sanctuary.

Gwen Ifill may have been a preacher’s daughter, her cousin said, adding, “Today Gwen is the coolest.”

Former U.S. Attorney General Eric Holder, citing controversies over today’s reporting, said this is “the time for journalists to be brave,” as Ifill was.

“She will be in our hearts forever,” Holder said.

Judy Woodruff, who was Ifill’s co-anchor on the PBS NewsHour, called her “my work sister” and told the audience “we mourn her every day.”

“She was a beacon of honest, fair reporting,” said Woodruff, citing Ifill’s work as a print journalist for the Washington Post and The New York Times, and as a television reporter for NBC and PBS.

“This is a very proud day for the Ifill family,” said her brother, Bert Ifill, an educator.

“Gwen did carry a torch that warmed us as it enlightened us,” he said.

The Rev. William H. Lamar, pastor of the Metropolitan African Methodist Episcopal Church, told the audience he could envision a heavenly conversation between Harriet Tubman, the Civil War abolitionist, and Ifill.

“‘Darling, I hear you got a stamp,’ Tubman would say to Ifill.”

The audience roared with laughter, knowing that Tubman’s image for the $20 bill has been delayed by the U.S. Department of the Treasury.

The ceremony lasted almost two hours and ended with a reception by the church honoring Ifill, one of the church’s best-known members.