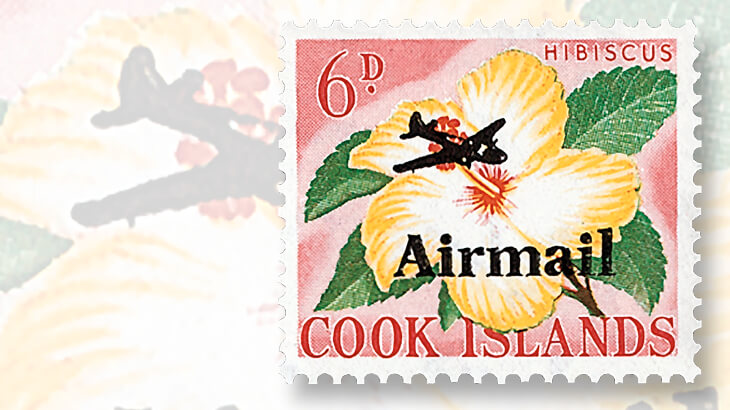 In 1966, the Cook Islands overprinted the image of an airplane on earlier regular-issue stamps. The plane added to the hibiscus design seems to be feeding on the flower’s nectar. 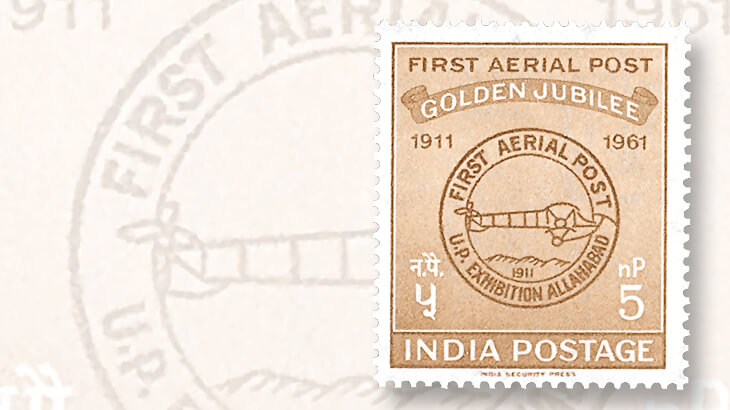 The first official airmail flight in India, in 1911, used a special postmark that served as the design of a 1961 commemorative stamp. 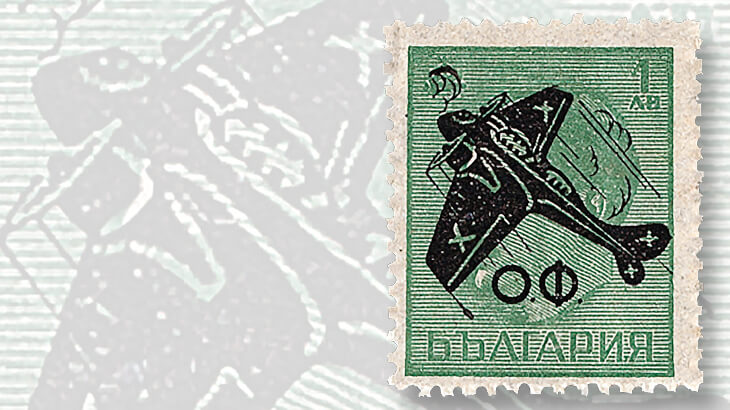 In 1945, a black overprinted airplane zoomed over a 1940 regular stamp portraying Czar Boris III, for duty as a new Bulgaria airmail issue. 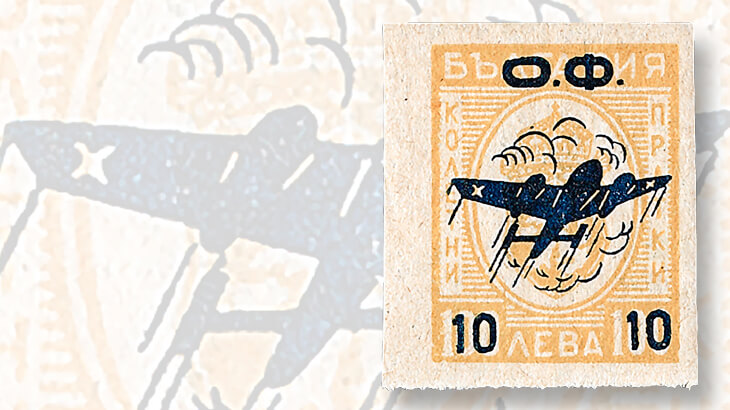 Imperforate Bulgaria parcel post issues of 1944 were used the next year as airmail stamps, with the addition of a black overprint of an airplane flying through clouds. 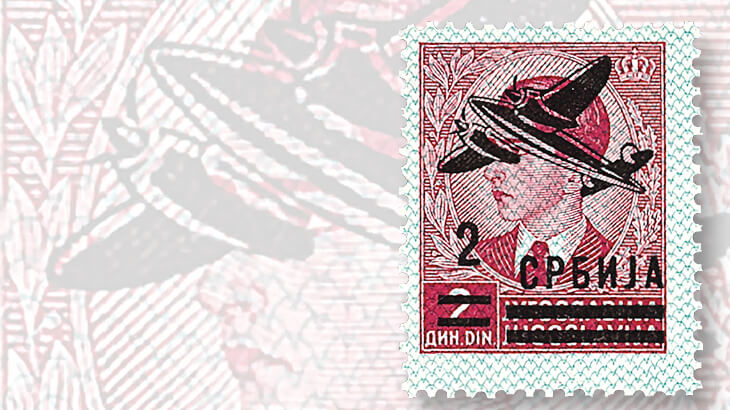 Serbia overprinted a 1939 Yugoslav issue in 1942 for airmail use, giving the portrait of King Peter II an odd crown. 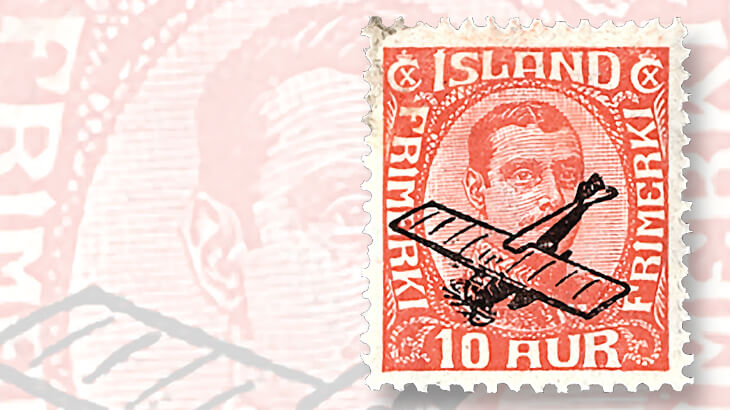 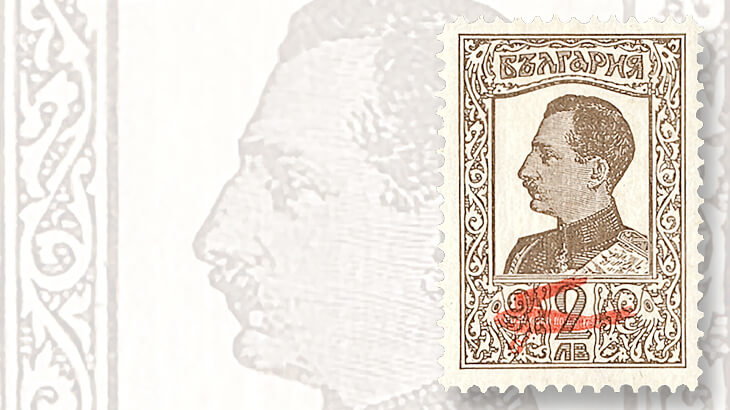 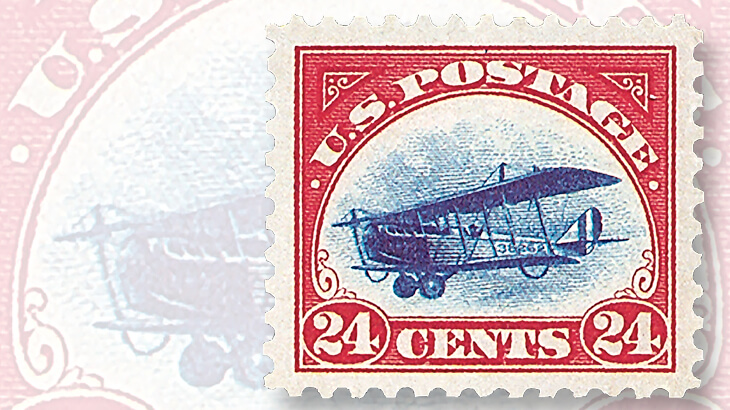 The Curtiss Jenny biplane was featured on the first United States airmail issue in 1918. 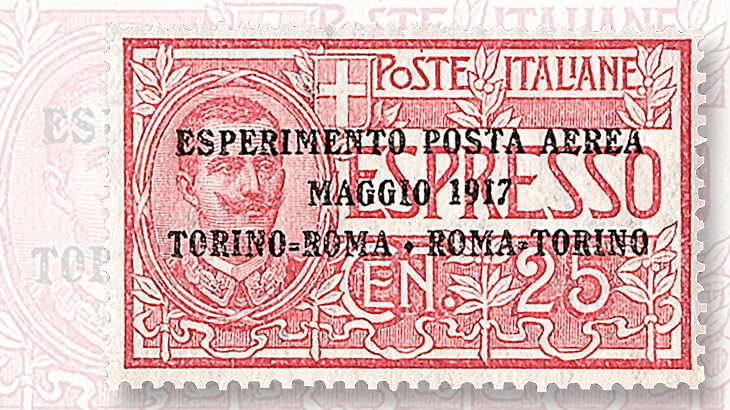 As cited on a United States airmail stamp (Scott C45) in 1949, the Wright Brothers performed the “first free controlled and sustained powered flight by man” in 1903.

In 1911, the world’s first official airmail flight took off in British India. The plane was piloted by Henri Pequet, who flew from Allahabad to Naini, a little more than six miles away, carrying 6,500 letters.

A special postmark was stamped on the letters, and the marking was reproduced on a 5-naye paise stamp from India in 1961 (Scott 336), shown in the first illustration here. After Pequet’s journey, airmail flights took off in many nations, and regular air routes were formed during this era, considered the pioneer period of airmail.

Some countries found that the added expense of producing new stamps for airmail letters and parcels could be cured by overprinting images of airplanes on existing postage stamps. In certain instances, stamps received airplane overprints when supplies of airmail stamps had been exhausted, or a rate change had occurred and stamps of new denominations were needed quickly.

For those of us who collect stamps, examples with airplane overprints provide another fun category to collect. Some of the overprinted issues become quite humorous, because of the underlying stamp.

An example is the Yugoslavia stamp issued in 1939 with a portrait of King Peter II, overprinted by Serbia in 1942 with an airplane (Serbia Scott 1NC16). The overprinted airplane lands on the king’s head to give him an unusual crown.

Bulgaria’s first airmail stamp was issued in 1927: an airplane overprinted in red on a 1926 2-lev Czar Boris III stamp. In 1945, two different overprints were used on existing stamps to convert them to airmail purposes. One shows a black plane soaring up to the left, applied to the Boris III stamps issued in 1940 and making them the new Bulgaria Scott C31-C32.

Four other 1945 Bulgaria airmail issues (Scott C37-C40) were made by applying an overprint to imperforate 1944 parcel post stamps showing the Arms of Bulgaria. The overprint, in various colors, shows a plane zooming upward to the right, through clouds.

Cook Islands’ first airmail stamps were issued in 1966, with an image of an airplane and “Airmail” overprinted on various issues of 1936-63. One of the underlying stamps for the new 1966 airmails is the 6-penny value, which used the design of a tiare maori, a hibiscus that is the national flower of the Cook Islands. The overprinted airplane sometimes seems to be feeding on the flower’s nectar (Scott C1).

Iceland’s first airmail stamp, in 1928, was based on the 1920 10-eyrir King Christian X stamp, adding a black overprint of an airplane zooming downward to the left, under the very nose of the dignified monarch (Scott C1).

Many, many aircraft of all types have landed on postage stamps of the world over the years since the first airmail flights. Prepare for takeoff in a new collecting field, if you haven’t already experienced the fun of airmail stamps and covers!