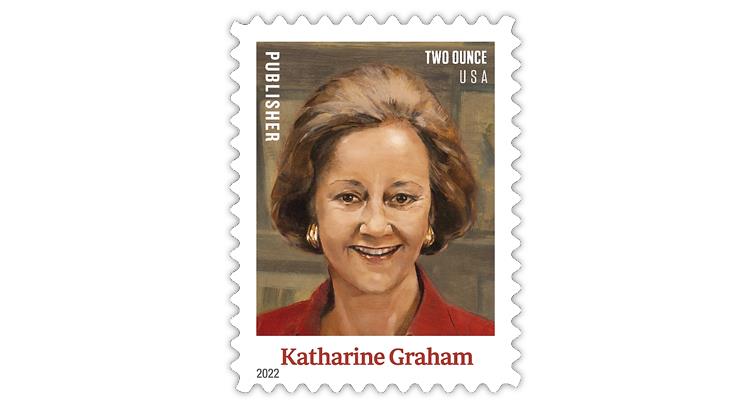 Influential newspaper publisher Katharine Graham, who led the Washington Post from 1963 to 1991, will be honored June 14 on a new United States forever stamp in the Distinguished Americans definitive series. 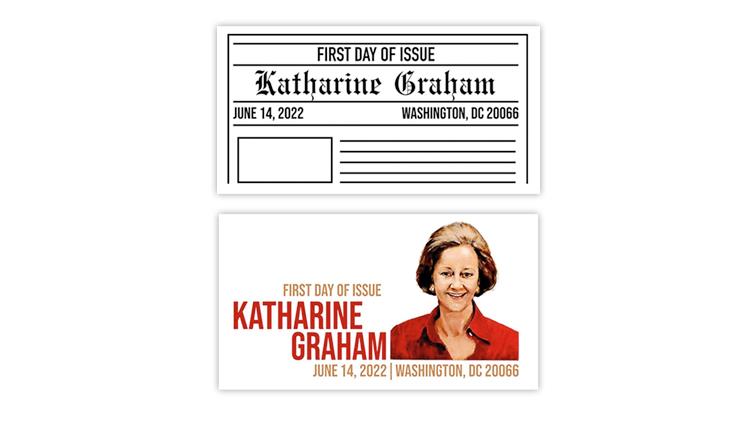 Two pictorial first-day postmarks for the Katharine Graham stamp are available from the U.S. Postal Service. The headline on the black cancel reads “Katharine Graham” in the distinctive font used by the Washington Post. The color postmark shows a head-and
Previous
Next

Katharine Graham, the formidable owner and president of the Washington Post Co. who served for almost 30 years as publisher of the organization’s flagship newspaper, the Washington Post, will be celebrated on a new United States forever stamp in the Distinguished Americans definitive series.

The nondenominated (78¢) forever stamp will be issued June 14 in Washington, D.C., where the Post is headquartered. The “Two Ounce” inscription at top right indicates the stamp will satisfy the 2-ounce first-class letter rate regardless of future rate increases.

According to the U.S. Postal Service, the stamp illustrates artist Lynn Staley’s oil portrait of Graham based on a 1970s photograph. Derry Noyes served as both designer and art director for the stamp.

The inscription “Publisher” in capital letters is printed in white reading down from the top left corner. “Katharine Graham” is lettered in red across the bottom margin below the portrait.

The ceremony is free and open to the public. Those who wish to attend are encouraged to register online at usps.com/katharinegraham.

Donald Moak, a member of the Postal Service’s board of governors, will serve as the dedicating official.

In 1940, Katharine Meyer married Phil Graham, who eventually succeeded his father-in-law as publisher of the Post. Graham took his own life in 1963, which suddenly put Katharine in charge of what would become one of the country’s most influential newspapers.

Her early years as publisher of the Post were challenging. At a time when women held less than 20 percent of newspaper jobs, there were few female role models for Graham, according to her biography on the Post’s website www.washingtonpost.com.

According to the biography, Graham described “one occasion when the man in charge of a meeting went around the room, asking every male participant for his opinion on the matter at hand. When he got to Graham, he stopped and simply acted as if she weren’t there.”

She became a force to be reckoned with when she decided to publish the Pentagon Papers, the controversial Department of Defense history of the United States’ involvement in Vietnam from 1945 to 1967.

The existence of the Pentagon Papers was first revealed publicly on the front page of the June 13, 1971, edition of The New York Times.

The events surrounding this momentous decision are recounted in the 2017 movie The Post, starring Meryl Streep as Graham and Tom Hanks as Bradlee.

The Post also rose to prominence for its “tenacious investigative reporting on the break-in at the Democratic National Committee headquarters in the Watergate Hotel in 1972, which led to President Richard M. Nixon’s resignation in 1974,” the Postal Service said.

During her tenure at the helm of the Washington Post Co., Graham became the first female to head a Fortune 500 company.

Graham stepped down as publisher of the Post in 1991. She received a Pulitzer Prize in 1997 for her memoir, Personal History.

Graham died on July 17, 2001, in Boise, Idaho. She was posthumously awarded the Presidential Medal of Freedom in 2002.

The new Katharine Graham stamp is identified by the Postal Service as the 17th issue in the Distinguished Americans stamp series that began in 2000 with the 10¢ Gen. Joseph W. Stilwell stamp (Scott 3420).