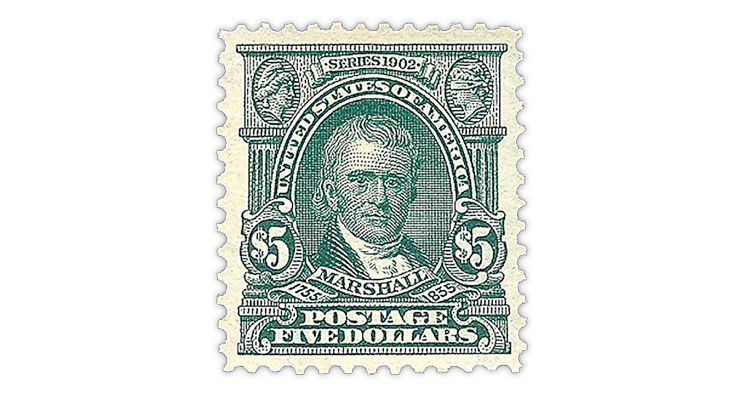 There is strong demand for the $5 dark green John Marshall stamp issued in 1903 (Scott 313) in the following conditions: used, unused without gum, and used with faults.

The 14 stamps of the 1902-1903 regular issue (Scott 300-313) were designed by Raymond Ostrander Smith, Clair Aubrey Huston or the two working together. The engraved stamps were produced by flat plate printing on paper watermarked double-line “U S P S” and perforated gauge 12.

The $5 dark green John Marshall stamp issued June 5, 1903 (Scott 313), was the highest denomination stamp in the set. It honors Marshall (1755-1835), the fourth chief justice of the Supreme Court of the United States. In office from 1801 to 1835, he was the longest-serving chief justice in the history of the United States and presided over numerous landmark decisions that shaped the republic in its early years.

We previously tipped this stamp in unused no-gum condition in the Stamp Market Tips column in the May 31, 2010, issue of Linn’s.

The $5 John Marshall stamp is in great demand in fine or better grade and used condition. An example in very fine grade without faults is well worth the full catalog value.

Expertization is a good idea to protect the buyer against hidden faults, such as reperforating, cancel washing and repairs. Killer cancels and hidden damage can be problems because the stamps were mainly used on heavy packages.

The stamp is also a good buy in unused no-gum condition at up to the full Scott catalog value for stamps in very fine grade. There is also demand for used examples with faults at up to half of Scott catalog value, depending on the appearance of the stamp.