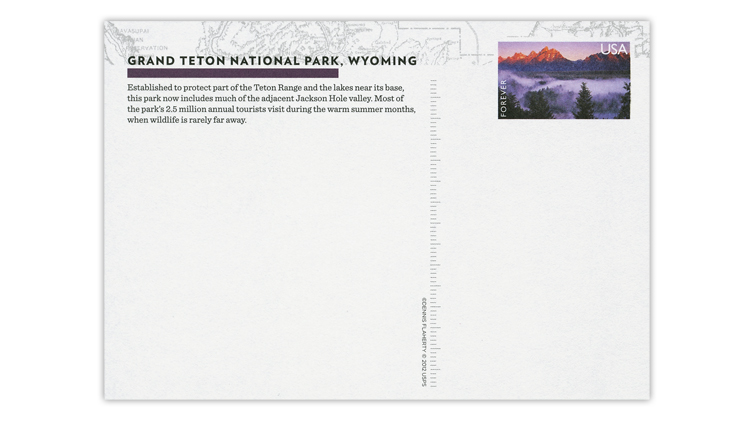 This 2012 Scenic American Landscapes series forever postal card shows Grand Teton National Park in Wyoming (Scott UX636) on the stamp imprint. The reverse of the card (not shown) includes a large image using the same photograph as the imprint.

The Scott Specialized Catalogue of United States Stamps and Covers devotes 29 pages to the listings that comprise these cards.

That section used to grow at a rapid pace in the past couple of decades but slowed considerably in 2012. The newest postal card is the first released in four years. What happened?

I enjoyed using those postal cards to send notes to friends, and I wish they would come back in some way. I saved a number of the Scenic American Landscapes series cards for future use when I travel to some of the sites shown on them.

I always thought the American Landmarks series of high-denomination stamps that started in 2008 would work perfectly on a set of these cards. They could even be produced separately and sold via Stamp Fulfillment Services and at the post offices nearest the landmarks.

I believe Canada Post does something similar to that concept and issues quite a few postal cards.

With the tourism industry hopefully facing a huge boom and many families using the mails to connect more, this might be the perfect time to reintroduce U.S. postal cards to the mailing public in an accessible format.