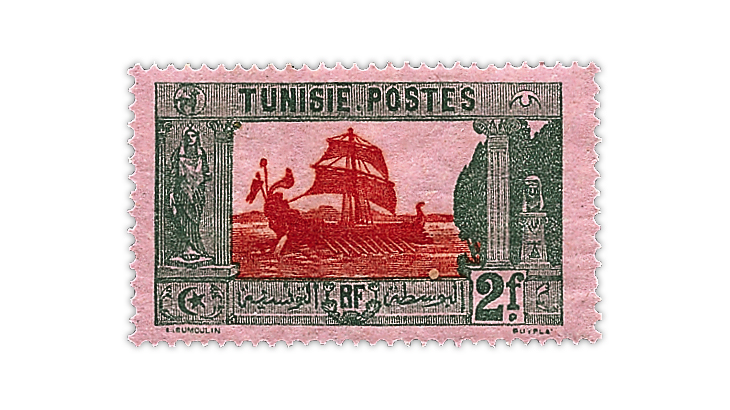 The 1906-26 Tunisia set of 29 definitive stamps is a good buy at full Scott catalog value in unused, hinged condition and very fine grade.

Tunisia is in the Maghreb region of North Africa. The northernmost country in Africa, it borders Algeria to the west and southwest and Libya to the east. It has 713 miles of coastline on the Mediterranean Sea.

In antiquity, it was the home of Rome’s great enemy, until Carthage was utterly destroyed at the end of the Third Punic War. Conquered by Arab Muslims in the late seventh and early eighth century, Tunisia became part of the Ottoman Empire in the 16th century. In 1881, it became a French protectorate.

Tunisia gained its independence in 1956 and deposed its hereditary bey (ruler) in 1957 to become a republic.

From 1906 to 1926, Tunisia issued a set of 29 definitive stamps (Scott 29-57). The lower face-value stamps are small and monochrome. The designs show plowing or the mosque at Kairouan.

Many of the stamps with higher denominations are larger and bicolor with designs showing the ruins of Hadrian’s aqueduct or a Carthaginian galley.

The set makes a fine display on an album page.

The Scott Classic Specialized Catalogue of Stamps and Covers 1840-1940 values the set in unused, hinged condition at $53.40. Centering with this issue was hit or miss.

You can find sets with stamps in fine to fine-very fine grades for $35 or less. If you want the set in very fine grade, it is a good buy at full Scott catalog value.